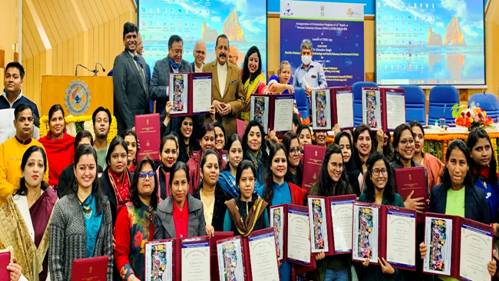 Speaking at the inaugural session of the 12th batch of the Women scientist Scheme-C, WISE-KIRAN IPR of DST training programme here today, Dr Jitendra Singh said that many of the big scientific projects including that of Gaganyaan are being led by women scientists. He said, even during the COVID pandemic, it was the Women Self Help Groups from Northeast who led from the front in providing bulk supply of face-masks in different innovative designs and colors to match the attire and big branded houses picked up the cue from them to manufacture the same. He said, one of the key pillars of Prime Minister Narendra Modi’s New India is the success story phenomenon of women innovators in the country.

The Minister said that soon after taking over as Prime Minister in 2014, Narendra Modi took several steps to institutionalize women participation in scientific endeavors. He pointed out that all the women welfare schemes rolled out after 2014 have very strong scientific basis, be it Swachh Bharat Mission to address the challenges of health hygiene or that of Ujjawala free gas cylinders to fight the menace of toxic smoke impairing lungs of rural women folk.

Dr Jitendra Singh highlighted that the alumni from the Women Scientist Scheme-C (KIRAN IPR) scheme contribute to 10% of active patent agents in country. He said, DST is actively engaged in creating an enabling environment for women in the science and technology domain with ‘Wos C scheme creating a significant impact on IPR ecosystem in India. It is not only empowering the women and but also creating human resources for strengthening the S&T ecosystem of the country, the Minister added.

Dr Jitendra Singh said that the WoS-C scheme or the WISE KIRAN-IPR’ supported by the Department of Science & Technology (DST) is being run by the Technology Information, Forecasting and Assessment Council (TIFAC), a technology and policy think tank, to bring back women who could not pursue their career in science and technology field due to domestic compulsions into professional field.

Dr Jitendra Singh said that the WOS-C scheme is a part of the bigger scheme in DST which aims to train women in IPR and related matters. He said, when the scheme started, only 20 women were trained in one year; however, over the years seats have increased to 120. The Minister informed that under the scheme, government is providing stipend to women for one year for getting training in IPR which is not putting any pressure on the family while women are being trained.

Dr Jitendra Singh recalled that the women scientist scheme was conceived in the tear 2002 under the leadership of the then Prime Minister Atal Bihari Vajpayee. Referring to the New IPR Policy of 2016 introduced under the leadership of Prime Minister Modi, which has many components like creating IP awareness, IF facilitation and capacity building, the Minister said, women can pitch in large numbers and give their contribution to the society by way of their assistance in nurturing and exploiting the Patents.

Dr V.K. Saraswat, Member NITI Aayog and Chairman TIFAC Governing Council, praised TIFAC for continuing the good work in Technology Foresight, hand-holding with innovators, implementing Tele Diagnostics programme, seaweed programme etc. He said the Women Scientist Scheme has contributed in enhancing the quality of drafting of patents as they are highly qualified in their respective technology domains in addition to intense training on IPR and patents.

Dr S Chandrasekhar, Secretary DST, expressed happiness about the outcome of the scheme and assured all support from DST to TIFAC in this regard. DG CSIR, Shri Shekhar Mande in his address, lauded the collaboration of TIFAC and CSIR for hands-on training and contribution of these trainees at IPU of CSIR. Dr NishaMendiratta, Head KIRAN IPR, also deliberated on the importance of the WoS-C scheme.

Prof. Pradeep Srivastava, Executive Director, TIFAC, welcomed all the delegates of the programme and briefed them about the selection process of trainees of the scheme through an all-India entrance examination (55 centres in 45 cities).

On this occasion, Dr Jitendra Singh also launched TIFAC Mobile App and said that through this App, all the services of TIFAC will be a click away for the public.

Women scientists of the 11th batch of WOS-C, popularly known as KIRAN IPR, received Certificates for successfully completing the one-year hands-on training on IPR from the Minister of Science and Technology. Total of 110 trainees completed their training in this batch, and about 27 trainees received certificates and others in absentia.