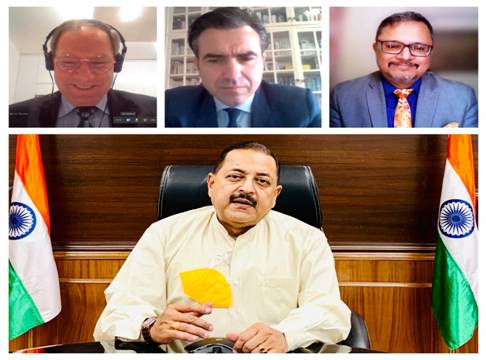 New Delhi: Union DoNER Minister of State (I/C) Dr Jitendra Singh has invited the British Government and the private sector for exploiting huge business potential in North Eastern Region of India. In a virtual meeting with officials of British High Commission, he said India and the UK, the two vibrant democracies enjoy a mutually rewarding business relationship and can work together in exploring and exploiting new opportunities in the North Eastern Region. He said

that new paradigms will emerge post-COVID, with a potential for new breakthroughs in economy, trade, scientific research and several other diverse areas in the N-E region and it will be a win-win proposition for both India and UK.

British officials have greatly appreciated the handicrafts, fruits, vegetables and spices in the North Eastern States and expressed their willingness to brand them and sell the same in global market. They said that Britain is a pioneer in Agri-Tech and could explore setting up cold chains in the region on the lines of what they did in Haryana for processing of food products.

Dr Jitendra Singh welcomed the British Council proposal for collaboration in the Education Sector for teaching Science and Mathematics in all the 8 States of the region and an MoU will be signed soon with North Eastern Council to take the collaboration to a new high. The Council also expressed willingness to work with Universities and Tech institutes of the region, mainly IIT Guwahati.

Dr Jitendra Singh said, in the last six years, the North Eastern Region had made up for several lapses of the past because for the first time the region received equal attention at par with the other regions of the country under the leadership of Prime Minister Narendra Modi. This had not only instilled confidence among the people but also raised the capacity to engage with other parts of India as well as the countries across the eastern borders, at different levels.

The Minister said that North Eastern Region has a special role to play in the promotion of trade and business relations with ASEAN as it is the gateway to the growing economies of South East Asian Nations. He said, Prime Minister Shri Narendra Modi has changed the policy of “Look East” to “Act East” to take the multilateral cooperation to newer heights.

Referring to the connectivity issues, Dr.Jitendra Singh said that in the last six years, there has been a significant development in terms of Road, Rail and Air connectivity, helping facilitate the movement of goods and persons not only across the region but also across the country. He recalled that that the Indo-Bangladesh treaty for exchange of enclaves, which was accomplished under the leadership of Prime Minister Narendra Modi, has cleared the decks for ease of business, ease of movement and ease of commuting, which was earlier a tedious task. He said that very soon we are also going to have a train to Bangladesh from Tripura heralding a new chapter and opening new vistas in the development of this region by providing the entire region access to the seaports. He also underlined the continued focus of the Indian Government to explore the alternate modes of transport that is Inland Waterways (from Brahmaputra to Bay of Bengal) connecting with other countries of the region as a cheaper option for trade, business and transportation. He said this will boost the trade across the borders especially with our eastern neighbours by leaps and bounds.

Dr.Jitendra Singh said that sectors like Horticulture, Tea, Bamboo, Piggery, Sericulture, spices like ginger, citrus-fruit, etc have the great potential for export. He also drew the attention of British Officials for effective Corona Management in North Eastern Region and said that post COVID, the region will emerge as a great business and tourist destination.