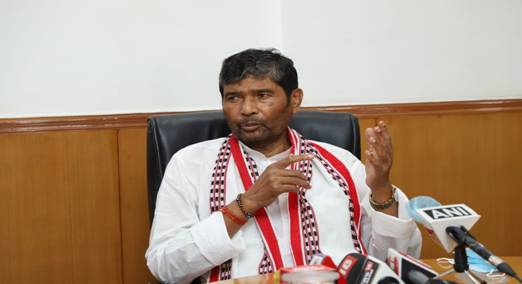 Union Minister for Food Processing Industries Pashupati Kumar Paras says, efforts are on for early completion of 19 Mega Food Parks in the country

New Delhi: Union Minister for Food Processing Industries Shri Pashupati Kumar Paras today said that efforts are on for early completion of 19 Mega Food Parks in the country, which are under various stages of implementation. He said, the primary objective of this scheme is to provide modern infrastructure facilities for the food processing along the value chain from farm to market.Ministry has accorded final approval to 38 Mega Food Parks and in-principle approval to three Mega Food Parks in the country. Out of these, 22 Mega Food Park projects have been made operational. He was speaking to the media after taking extensive tour of the Ministry and interaction with Senior officials and staff. Secretary, Food Processing Industries Ms PushpaSubramanyam accompanied the Ministerduring the formal tour and interaction.

The Minister said that efforts are also on to boost value addition in 22 perishables like Mango, Banana, Apple, Pineapple, Carrot, Cauliflower, Beans etc identified by the Ministry to supplement the income of farmers.Government has announced expansion of scope of “Operation Greens Scheme” from Tomato, Onion & Potato (TOP) to 22 perishable products, in the budget speech for 2021-2022.Shri Paras said, there is huge scope for Mini Food Parks in North Eastern Region and in North Bihar.

Shri Paras said that he will be visiting Bihar on 20th of this month and will also conduct an on-the spot assessment of Mega Food Park at Mansi in Khagaria district of Bihar, which he said is 70 percent complete. The Minister will also meet Bihar’s industry minister Shahnawaz Hussain to assess the progress of mega food park at Motipur block of Muzaffarpur district, approved by the Centre in April this Year. He said, the Food Parks will help the farmers of the region growing Litchi, Makhana, Banana, Potato and Maize in large quantities and will provide fresh employment opportunities to women and youth of the area.

Shri Paras informed that that National Institutes of Food Technology, Entrepreneurship and Management Bill, 2021 has been notified after its passage from Parliament in the just concluded session. He said, with this, National Institute of Food Technology Entrepreneurship and Management (NIFTEM)Kundali (Haryana) and Indian Institute of Food Processing Technology(IIFPT)Thanjabur (Tamil Nadu) under the Ministry of Food Processing Industries have become Institutions of National Importance (INI).

Shri Parasexpressed his gratitude to Prime Minister Shri Narendra Modi, for this landmark step, which will provide these Institutes Greater Autonomy, so that they can start new and innovative courses, as well as help them to attract excellent faculty and students.

University of Cambridge: No ‘safest spot’ to minimise risk of COVID-19…

iednewsdesk Jun 23, 2022
Researchers have demonstrated how airborne diseases such as COVID-19 spread along the length of a train carriage…

University of York: Free School Meals criteria needs to be widened to…

University of York: Staffing and ‘siloed’ working a barrier to care of…

University of York: Researchers identify how robotics and autonomous…

University of York: Researchers find way to target cancer while…