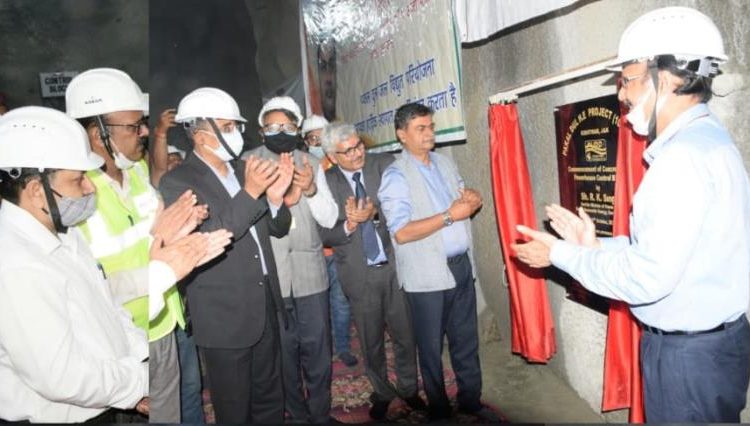 Jammu and Kashmir will be Power surplus in coming times, says the Minister

KISHTWAR : Union Minister for Power, New & Renewable Energy, Shri R. K. Singh who was on a visit to Kishtwar today inspected Dul Hasti Hydroelectric Power Project besides took stock of the construction of other power projects with a total generation capacity of 2554 megawatts in Kishtwar.

During his visit at 390 MW Dul-Hasti Dam site at Dool, the Minister reviewed the generation capacity of the power project besides assessing other related aspects of the project.

Speaking on the occasion, the Power Minister said that the government has taken commendable initiatives to harness the Hydroelectric Power Generation in the district. The Minister mentioned that people will witness a change in the power sector as Kishtwar is going to become a hub of Hydroelectric Power that will make Jammu and Kashmir power surplus.

Later, the Minister inspected the power house site of the 1000 MWs Pakal Dul Hydroelectric Project at Arzi. The project is jointly being built by the Chenab Valley Power Projects Private Limited, NHPC and J&K Power Development Corporation. The Minister inaugurated the concreting of the power house control block there.

Shri Singh said that he is satisfied on the pace of the construction work at Pakal Dul Power House & stressed that the concerned officers must ensure completion of all ongoing works in a stipulated time following Covid19 SOPs so that these projects will be commissioned well in time so as tofulfil the Power Generation demand.

The Minister also took stock of the progress on implementation of the Area Development Plan in the adjoining areas of these projects and directed the District Administration to ensure the timely implementation of ADP for the benefit of PAFs.

CEO, NITI Aayog holds interactive session with the Administrative Secretaries, Assures support to the Union territory in a gamut of areas