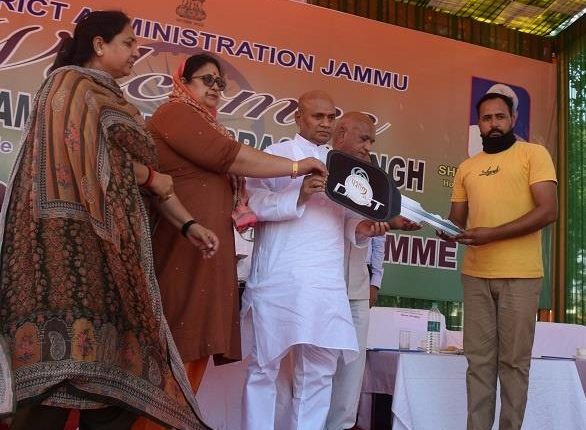 During the visit, the Minister inaugurated three recently completed projects amounting to Rs 581.88 lakhs which include Water Supply Scheme at Sungal Palyari, Block Akhnoor; Additional Block at Government Degree College Akhnoor and Panchayat Ghar at Sungal Lower-C Block Akhnoor. The Minister also distributed assistance under various schemes to different beneficiaries which included vehicles under MUMKIN, scooter and wheelchairs to specially-abled persons and tractors among other forms of assistance.

Addressing a public meeting at Government Higher Secondary School, Akhnoor, the Minister said that the outreach programme is result of the Prime Minister’s concern for the people of J&K. He said that the Government is focussed on identifying the pulse of the public and therefore developing policies and schemes for bringing development to the doorstep of the general public at grass root level.

Lauding the people’s enthusiasm for the 3-tier PRI System, the Minister said that only by strengthening grass root democracy, the democracy can be truly empowered and a novel start has been initiated in J&K under the leadership of the Prime Minister. “We are working towards establishing peace and order in Jammu & Kashmir and only with durable peace, prosperity and progress shall prevail” the Minister said.

Earlier the minister inspected stalls set up by various departments as part of “Block Diwas” highlighting various schemes being implemented in the district and showcasing the local heritage of handicraft and handloom products.