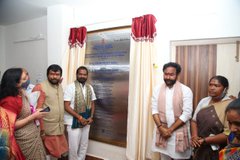 New Delhi: Union Minister for Culture, Tourism and Development of North Eastern Region (DoNER) Shri G Kishan Reddy visited Mulugu and Warangal districts of Telangana on 21st October in connection with projects/programmes of Union Ministries of Culture and Tourism.  Several ministers and public representatives of the Government of Telangana and officials of the Archaeological Survey of India (ASI) and officials from the Ministry of Tourism and relevant officers in the Telangana state government were also present.

The Union Minister inaugurated several Tourism projects as a part of the Tribal Circuit under Swadesh Darshan Scheme in Telengana. In 2017, the Government of India had sanctioned Rs. 75.88 crores for the integrated development of a tribal circuit of Mulugu-Laknavaram -Medavaram- Tadvai – Damaravi- Mallur – Bogatha Waterfalls. As a part of this circuit the Union Minister for Tourism Shri G Kishan Reddy inaugurated the Haritha restaurant block at GattamaenroutePalampet.

The Union Minister Shri G Kishan Reddy inaugurated the wayside amenities and other public convenience facilities, under Swadesh Darshan Scheme at Mulugu. He said, “These facilities shall greatly benefit the tourists and attract a large number of tourists to visit the Mulugu District which is also the gateway to Medaram”.

The Union Minister unveiled the plaque of the World Heritage Site Inscription of the Rudreshwara (Ramappa) Temple of Mulugu, Telangana. He said, “This inscription is a recognition of the ingenious brilliance & architectural prowess of the Great Kakatiyas.The Rudreshwara temple stands as a unique testimony to the highest level of creative, artistic and engineering talents involving various experimentations in expressive art forms of Kakatiya period”.

Before unveiling the UNESCO plaque at the Ramappa Temple, the Union Minister Sri G Kishan Reddy also offered his prayers to the deity of RudreshwaraSwamy. He said, “I want to express my heartfelt gratitude to our Prime Minister Shri Narendra Modi ji who spoke to the heads of various countries across the world to ensure that their representatives in UNESCO voted in favour of Ramappa.”

“It is a matter of pride for all people of Telangana that we now have the first world heritage site from the state. We will ensure the development of Ramappa by creating good amenities and making it a tourist friendly destination”, he added.

During his trip, the Union Minister also visited the Thousand Pillar Temple at Hanamkonda, Warangal dedicated to Lord Shiva, Vishnu and Surya. The temple is a testament to the greatest arts of the Kakatiyas and is an iconic destination for Tourism in Telangana. Apart from this he also visited the Warangal Fort and attended the light and sound show at the fort. The Union Minister also spoke about the measures being taken by civil aviation to develop Warangal Airport and said that these initiatives will boost tourism of Ramappa and the places around it will undergo  a holistic development.

The Minister also took time to acknowledge the feat of administering a record of 100 crore inoculations. The Union Minister G Kishan Reddy thanked all the health care warriors who stood on frontline to fight against covid. He said, “The relentless efforts of our health care workers and the visionary leadership of our Prime Minister Shri Narendra Modi ji has made it possible for our nation to achieve this 100 crore target”.