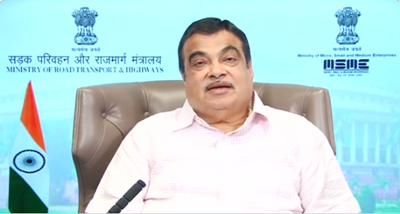 New Delhi: Union Minister for Road Transport and Highways Shri Nitin Gadkari today addressed India@75 Summit : Mission 2022 organised by the Confederation of Indian Industries. He said, there is urgent need to look towards improving presence of MSME industry in the 115 identified aspirational districts of the country. Their contribution to GDP is presently negligible, but if focused attention is drawn towards them, these can uplift the employment scene in a big way.

The Minister informed that the government is working upon a scheme for inclusion of smallest units under MSME ambit providing for their micro financial requirements. Recently, the MSME umbrella has been expanded and industry with investment value uptoRs 50 crore and turnover uptoRs 250 crore has been covered in the new definition of MSME. Also, the manufacturing and service sectors under MSME have been brought together by giving similar definitions to both.

Shri Gadkari called upon the CII representatives to share ideas and suggestions for improving the overall economic condition of the country. He cited the example of China, where top 10 business categories contributed about 70 per cent to its export bill. He said, by technology upgradation, India can also look for new export avenues in MSME sector. This will help grow a large number of ancillary units, he said.

Shri Gadkari also asked CII to draft a proposal for insurance of roads which will remove requirement of Bank Guarantee(BG). This will speed up financial closure of road projects and in raising finances, thereby faster project completion. He elaborated how road scenario was changing in the country which would further immensely improve with proposed 22 new green expressway projects.