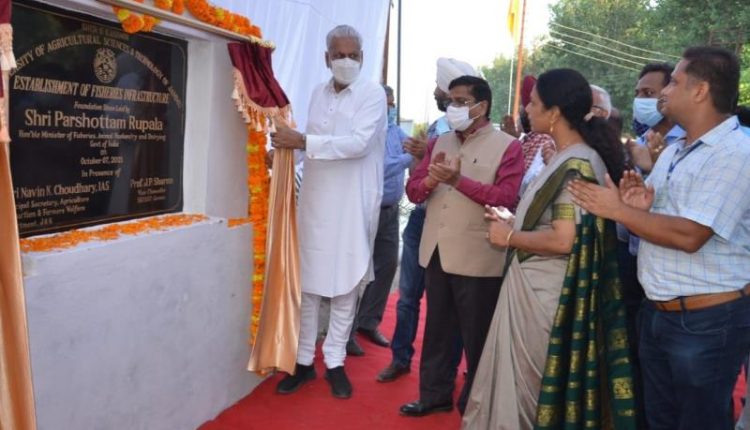 The Minister complimented the University for organizing the event with focus on demonstration of innovative technologies developed by the University to improve agriculture productivity and sustainability in Jammu region.

He also inaugurated ‘Innovative Farmers’ Conference organized on the occasion.

“This stupendous initiative of SKUAST towards bringing teachers, students, farmers and entrepreneurs on a common platform for exchanging their valuable and innovative experiences would immensely help the farmers double their income as envisioned by the Modi government”, the Minister maintained.

He appreciated the technological interventions in the field of agriculture exhibited by different stalls during the fair and hoped the participating farmers from different states and Union Territories would be benefitted greatly. He also advised farmers to visit integrated farming system of SKUAST Jammu and develop it in their farms to increase their income manifold.

“There is immense scope for fish and livestock farming in Union Territory of Jammu and Kashmir besides Ladakh as well for doubling farmers’ income”, Union Minister asserted while emphasizing the farmers’ to exploit this potential to the optimum. He also urged upon farmers to adopt diversification in agriculture for achieving sustainability in the field.

Union Minister assured that all the issues of SKUAST-Jammu will be considered on priority for further streamlining of functioning of the University.

Sh Rupala informed that the limit for establishment of project in livestock has been increased by the government of India from five animals to 200 with 50 per cent subsidy. He said scaling of farmers of J&K is required and SKUAST-Jammu can become a Model University for diffusion of innovative technologies from lab to land. He also appreciated formation of plantation committee in one of the villages of Udhampur district and asked all to replicate the initiative in other areas.