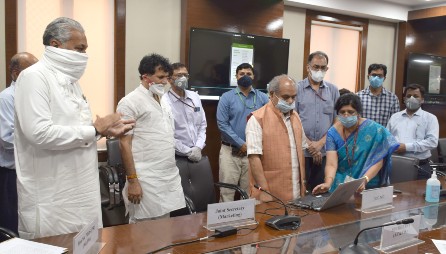 New Delhi: Union Minister of Agriculture & Farmers’ Welfare, Rural Development & Panchayati Raj Shri Narendra Singh Tomar held a meeting on 25th July, 2020 through Video Conference to deliberate with the representatives of World Bank, senior officers of the Department of Agriculture, Madhya Pradesh, scientists, Vice-chancellor of Rajmata Vijayaraje Scindia Krishi Vishwa Vidyalaya, Gwalior and other stakeholders to bring the large Bihad area of Gwalior – Chambal region under agriculture. During this meeting it was decided that the substantive project would be prepared in collaboration and support from World Bank to accomplish this work. In this regard, a meeting was also held earlier with the representatives of World Bank and it has been decided to prepare a preliminary project report within a month.

Speaking on the occasion, the Union Agriculture & Farmers’ Welfare Minister informed that more than 3 lakh hectares of rugged land is not cultivable and if this area is improved, then this will help in the integrated development of the Bihad area in Gwalior – Chambal region. He further mentioned that the proposed reforms in this project will not only help to improve agricultural development and the environment, but it will also create employment opportunities for the people and lead to substantive development of this region.

Shri Tomar said that there is a lot of scope for development of the Bihad area in Gwalior – Chambal region. The Chambal Expressway will be built and will pass through this area, by which the overall development of the region would be possible. After preparing the initial report, subsequent meetings will be held with the Chief Minister of Madhya Pradesh for further course of action.

The representative of World Bank, Mr. Adarsh Kumar said that the World Bank is interested in working in the state of Madhya Pradesh. Shri Vivek Aggarwal, Joint Secretary, Ministry of Agriculture & Farmers’ Welfare said that all the aspects related to technology, infrastructure, capital cost, investment etc. will be taken into consideration prior to initiating the work of the proposed project with minimum budget allocation.

Shri K.K. Singh, Agricultural Production Commissioner said that the old project has been revived and will be undertaken under the guidance of the Union Minister of Agriculture & Farmers’ Welfare, Rural Development and Panchayati Raj. Dr. S. K Rao, Vice-Chancellor of Rajmata Vijayaraje Scindhia Agricultural University, Gwalior said that the work can be done keeping in mind the overall agricultural development of the region.