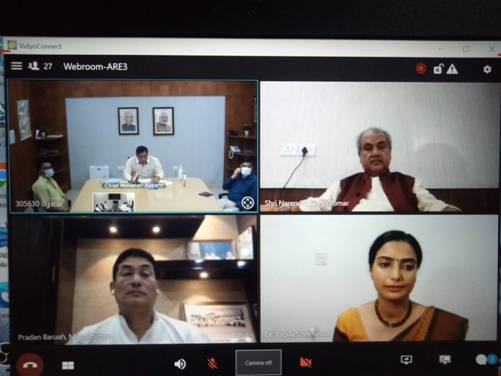 New Delhi: Union Minister of Agriculture & Farmers’ Welfare, Rural Development, Panchayati Raj & Food Processing Industries Shri Narendra Singh Tomar dedicated to the nation yesterday the campus of the new Indian Agricultural Research Institute, Gogamukh, Assam. Speaking on the occasion, Shri Narendra Singh Tomar announced that the IARI, Assam will be named after Pt. Deen Dayal Upadhyaya. The Minister said that as visualized by Prime Minister Shri Narendra Modi, the setting up of this Institute will give an impetus to development of agricultural education and research in the states of Arunachal Pradesh, Meghalaya, Manipur, Mizoram, Nagaland, Tripura and Sikkim, in addition to Assam. By the year 2050, the population of the country and the challenge of climate change will increase considerably. The Government is working in the direction that the country’s agricultural sector remains strong to be able to meet these challenges and there are sufficient food reserves at all times.

Appreciating the lead role played by the country’s agricultural scientists in bringing about the Green Revolution by developing several high yielding seed and crop varieties, Shri Tomar said that the country is now not only self-sufficient but also surplus in foodgrains production. The Government has made efforts to plug the gaps in the development process, and as a result new Agricultural Research Institutes have been established in Jharkhand and Assam. Sikkim is now a totally organic state, and other states are also progressing in this direction. The Minister stressed that in view of the challenge of climate change and water scarcity, it is important to undertake crop diversification and develop varieties which require less water to grow. He also emphasised the importance of locally grown crops for enhancing farmers’ income and export opportunities.

Chief Minister of Assam, Shri Sarbanand Sonowal thanked the Hon’ble Prime Minister for the establishment of IARI, Assam and expressed hope that the Institute would be able to fulfil its objectives. He emphasised on research activities on locally grown horticultural crops of the region for enhancing farm income of small and marginal farmers through enterprise diversification. He also hoped that the north-eastern states will be again known as “Bowl of Rice” with the support of ICAR-IARI, Assam. Union Minister of State for Agriculture Shri Kailash Choudhary, Director General, ICAR Dr. Trilochan Mohapatra, public representatives, scientists and government officials were present at the inauguration ceremony. The report of the institute was presented and emphasised on water use efficiency from June to September in the north-eastern region and organic farming of local grown crops.

Indian Agricultural Research Institute (IARI) is known as seat of “Green Revolution” which has contributed immensely in development of science based technologies and quality human resource. In both these areas Eastern India is far behind the other parts of the country. The Eastern states including Assam possess huge potential to bring about the much needed “Second Green Revolution” in the country. It was also realized that this is an opportune time to replicate the success of IARI in the Eastern Part of the country. In view of this, the Union Finance Minister in his maiden budget speech had announced the establishment of IARI like institutes in Jharkhand and Assam on July 10, 2014, so as to cater to the needs of the resource rich eastern part of the country and harness the potential of agriculture, animal sciences, fisheries, horticulture and forestry.

Accordingly Government of Assam provided land for establishing this Institution at Dirpai Chapori, Gogamukh circle, Dhemaji district of Assam covering an area of about 585 acres of land. The selected site is located at about 430 km from the state capital Dispur, 45 km from Dhemaji town (District Headquarter) and 100 km from Dibrugarh, the second largest town of Assam.

· Digital survey and demarcation of the boundary of the allotted land started in September, 2017 and completed in July, 2018.

· Construction of boundary wall, pre-fabricated building and gates was started from September, 2018 which have been completed

iednewsdesk Oct 24, 2021
Sure, you could attach two screens with a hinge and call a cell phone “foldable,” but what if you could roll it…

University of Geneva: The human immune system is an early riser

University of Geneva: The disappearance of women researchers in times…