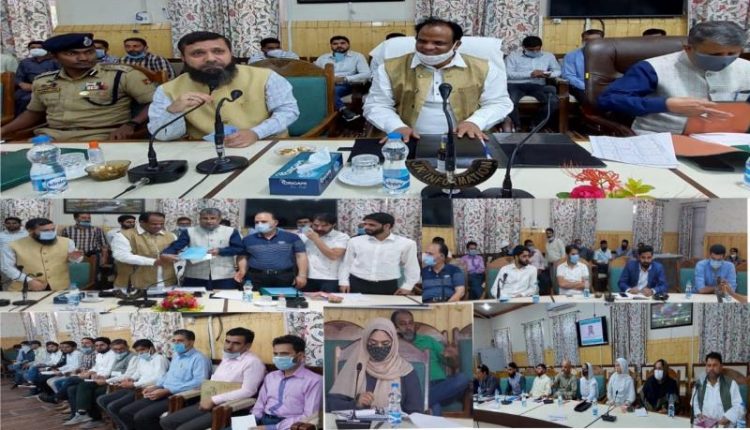 KUPWARA : Union Minister of State for Minority Affairs, John Barla today said that Union Government headed by Prime Minister Narendra Modi has a good dream for development of Jammu and Kashmir, adding that the present out-reach programme has been initiated by the Government to know the basic problems of the people at ground level for its timely resolution.

DC Srinagar holds interaction with Artisans; Assures of all…

The Minister said that he was feeling great happiness while talking one to one to the public representatives of the frontier district Kupwara. He assured that the requests, issues and grievances projected by PRIs, deputations and the public have been taken note of and the same would be put up with Government at Union level as well as with Lieutenant Governor for redressal, Shri Barla added.

The Minister said that he was very much impressed by peaceful atmosphere and supportive and cooperative attitude of the people here, adding that some vested interests are misleading the rest of the country about the situation in Kashmir.

John Barla said that he will tell to the people across India about the peaceful environment and hospitality of the Kashmiri people. Congratulating the PRIs and administration for successful establishment of three tier Panchayati Raj System, the Minister said that the three tier system of government was available to the people of Jammu and Kashmir first time in the history of independence, adding that it was the joint responsibility of Administration and PRIs to boost the developmental tempo of rural economy.

The Minister said that Government of India has been already working on various flagship programmes aimed at to develop socio economic status of the people and number of new schemes are also in pipeline, adding that the need of the hour is to generate a massive awareness regarding all welfare schemes so that the benefits of these schemes could percolate down to the grassroots level. He urged upon the PRIs to go through the compendium of the schemes, which was provided to them earlier, and get their proper use in the field.

iednewsdesk Sep 16, 2021
On 8 September 2021, Siberian Federal University hosted a round-table discussion on the cooperation of industrial…

Tomsk State University: TSU investigates how to lessen the stress from…

SPbPU: Algorithm for international students to come to Polytechnic…