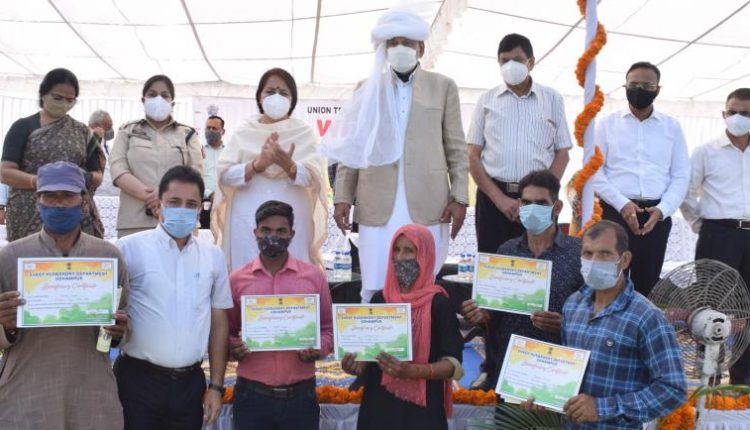 On his arrival at GCW Women NCC Cadets of the College gave guard of honour to the Minister after which he interacted with the staff members and students on the occasion. The Union Minister also planted trees in the college premises. He urged the public and students to plant more trees so that the balance in nature could be maintained. He added that the task of environment protection is a universal responsibility of all of us.

The Union Minister along with DC Udhampur inaugurated the departmental exhibition at GCW and interacted with the unit holders of Animal/Sheep Husbandry and Fisheries departments. The Union Minister had a round of stalls installed by Animal Husbandry, Sheep Husbandry and Fishries department for general awareness of different Government schemes. He called upon the officers to make their sincere and dedicated efforts to make the general public aware about the different Central Government schemes made especially for the upliftment of rural people.

While addressing the gathering, the Union Minister congratulated the District Administration for organizing impressive function in a short span of time on second day of this outreach programme. The Union Minister called upon the youths to take up fish farming and setting up of own fish farms for increasing their production and source of income generation as the sector has a huge scope of employment which will be supported by the Government of India under Atma Nirbhar Bharat Abhiyan. The Union Minister observed that fish farming can be a great tool to solve unemployment and poverty.

He asked the youth to come forward and avail maximum benefits of different Government schemes. He assured that every possible help will be provided by the Government. He stressed on organic farming to increase income generation and its promotion in rural areas, as organic crops are highly remunerative and health protective. He stressed upon the officers to ensure effective implementation of Government sponsored schemes meant for socio-economic transformation of farmer’s community. He also informed about the initiatives being taken by Prime Minister of India for the betterment of farmers and to double their income by 2022. The Union Minister informed that the Government of India has established veterinary mobile units across the country to deliver veterinary services at the doorstep of farmers.

Later, the concerned officers gave a sector wise detailed power point presentation about the implementation of different departmental schemes in the District.