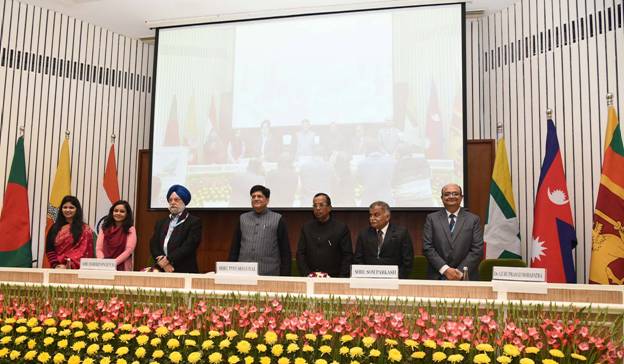 New Delhi: The two day ‘Prarambh’, Startup India International Summit begin in New Delhi today, with members of BIMSTEC (Bay of Bengal Initiative for Multi-Sectoral Technical and Economic Cooperation) countries participating in the inaugural event. The Summit is being organizing by Department for Promotion of Industry and Internal Trade, M/o Commerce & Industry, as a follow up of the announcement made by the Prime Minister Shri Narendra Modi at the 4th BIMSTEC Summit held in Kathmandu in August, 2018.

Declaring the Summit open, the Minister of Railways, Commerce and Industry, Consumer Affairs and Food and Public Distribution Shri Piyush Goyal said that the Summit is a demonstration of neighbourhood first policy which will booster partnership among the member countries. He hoped that this will usherin a new beginning, showcasing various aspects of the startup world. He said that Indian startup ecosystem has made big progress in the last five years since the launch of Startup India. The Minister said that the partnership among the BIMSTEC countries in the sector will take startups to the forefront of new India, new world, new neighbourhoodin the new normal.

Shri Goyal said startups have ideas, show enthusiasm and come up with innovations, and hence timing of the Summit during this pandemic is perfect. He expressed the hope that the Summit will mark a beginning of a new journey towards new horizon, with hope and encouragement. “Growing beyond Government to Government and business to business collaborations, this Summit will ensure startup to startup collaboration, with exchange of ideas and young minds working together collectively to solve problems and assuring prosperity and growth in the region.”, he added.

Shri Goyal expressed happiness that youngsters of today show entrepreneurship inclination who are no more the job seekers but have become job creators. India has over 41,000 startups registered with the Government but there are many more who are working at the grassroots level and doing a good work. The Minister said that he has been asking the Indian capital to encourage and support the Indian startups at an early stage, but now would request Indian investors and capital to look towards the BIMSTEC startups also to mentor and support them.

The Minister expressed the hope that India along with all the BIMSTEC countries will certainly experience unprecedented growth in the post Covid pandemic world and start a global area of development. He said that Prime Minister Narendra Modi’s encouragement to our startups and efforts to create an ecosystem full of innovation, invention and enterprise, will surely work like a battery where a positive attitude and tremendous ability powers the future of startups. He said skill development is another important area which would play a very important role in boosting the entrepreneurship spirit and giving confidence to our entrepreneurs. He said that he would like to encourage Indian investors to work towards greater engagement so that we can truly demonstrate to the world our commitment to make startups the pillar, on which future economic development will prosper. He also expressed the hope that the collective commitment demonstrated by BIMSTEC nations will surely encourage startups in all other countries. He said there is a huge potential in the collaboration because we will see new ideas prospering and young minds working together to come up with new ideas, new innovations, new inventions. Startup to startup collaboration has a huge potential because with this new idea will prosper and young minds will come together to work collectively.

Speaking on the occasion, Minister of State (I/C) for Civil Aviation and Housing & Urban Affairs and Minister of State for Commerce and Industry Shri Hardeep Singh Puri said that the Startup India initiative has created a ripple effect across Central Ministries and States to come up with well-crafted programmes, to support the startups. He expressed the hope that the Summit will provide an opportunity to startups to learn from each other’s best practices and benefit. He expressed the Government’s commitment to fully support the startups.

Minister of State for Commerce & Industry Shri Som Parkash said that the Government is fully committed to create conducive environment for the growth and development of startups and in this regard various reforms and initiatives have been taken. He said that the Atmanirbhar Bharat is fully connected to the Startup ecosystems. The Minister said that the Summit is an excellent opportunity for all the startups to come together, handhold, cooperate and grow.

The Secretary General BIMSTEC H.E Mr. Tenzin Lekphell said that the Summit has brought together leaders, investors, scholars, policy makers, startup innovators and entrepreneurs together. He said that whenever the humanity has faced challenges, the human ingenuityand resilience hashelped the world to overcome it. He said that the economy, jobs, livelihood, business, trade and commerce have been badly affected due to Covid pandemic, and Startups provide a ray of hope with a capacity to innovate and respond quickly to any problem. He called upon the member countries to provide policy support and come together to help the startups. Mr. Lekphell suggested that such conclaves should be held annually to provide support to startups. He also suggested to set up a startup hub in the BIMSTEC Secretariat.

Prime Minister Shri Narendra Modi will interact with startups and address the Summit tomorrow at 5 p.m. via Video Conferencing. With participation from over 25 countries and more than 200 global speakers, the Summit is the largest Startup India International Summit organized by the Government of India since the launch of the Startup India Initiative in 2016. The Summit is having 24 sessions with focus on enhancing multilateral cooperation and engagement with the countries from around the global to collectively develop and strengthen the Startup ecosystem.

iednewsdesk May 21, 2022
On any given day at Launch Chapel Hill, you’ll find local entrepreneurs immersed in the daily grind, intently…

University of Sheffield: Superheroes of film, health and manufacturing