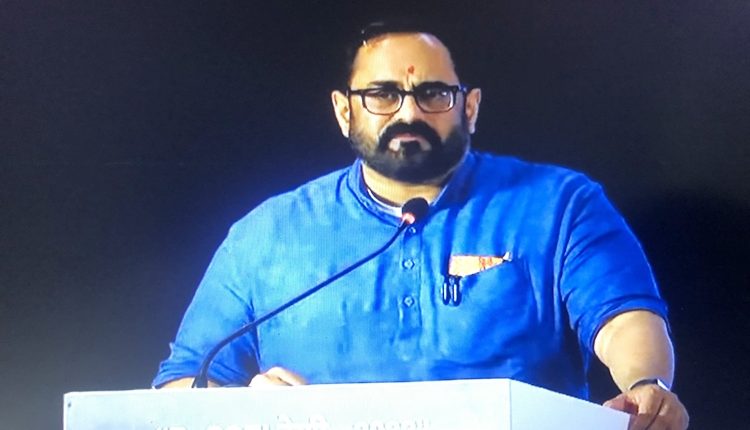 New Delhi: The Union Minister of State for Skill Development and Entrepreneurship Rajeev Chandrasekhar inaugurated a National Conference on the development of the Space Start-up Ecosystem in India. The conference held in Bengaluru today was organised by the Astronautical Society of India in association with the Indian Space Research Organisation, New Space India Limited, Indian National Space Promotion and Authorisation Centre and Defence Research and Development Organisation.

Maanav Kejriwal from JAIN College emerges as the state…

In his inaugural speech, the Minister of State for Skill Development Dr. Rajeev Chandrasekhar said that there is confidence and ambition created in the innovation sector for the start-ups to prosper. He said that since the last eight years a conducive eco-system has been created for the private industries to flourish in the areas of Artificial Intelligence, space science, semiconductor and fin-tech sectors. He underlined the importance of start-ups in promoting high tech products and innovative services. He said, start-ups are the core of the new India economic ecosystem which can transform India into a country that can innovate for the world.

The Chairman of ISRO and Secretary of Department of Space S. Somnath said that industries and start-ups have contributed immensely to the space programme in recent years. He said, to scale up operation and adopt technology developed by ISRO, the role of start-ups and high tech industries are important. He informed that ISRO is moving towards gaining self-reliance through commercial satellite launches. He informed that on 30th of June, ISRO is going to launch PSLV-C53 from Sriharikota launch pad that will carry to outer space the DS-EO satellite along with two co-passenger satellites. It will also have an Orbital Experimental Module that will be orbiting the Earth as a stabilised platform. During the inaugural event, CANSAT INDIA Nano satellite making competition for the students across the country.

RWTH: “Graphene 2022” shows the potential of a future…