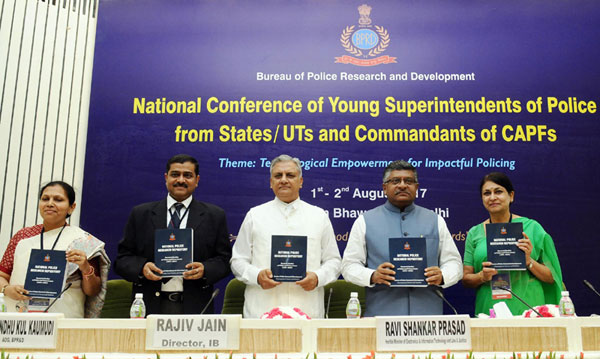 Speaking on the occasion, Shri Ravi Shankar Prasad said that the young officers must be aware of the transformation taking place in India. He said that the schemes and initiatives of the Government are framed in such a manner that citizens are empowered to lead a better quality of life. The Minister highlighted about ’Digital India’ programme and said that the aim of the programme is to bridge the digital divide and the focus is more towards poor sections of society. He said that digital empowerment is not sufficient, unless there is digital inclusion. Technology should be affordable, inclusive and development oriented, he added.

Shri Ravi Shankar Prasad said that social media is picking up pace in India and police system must upgrade itself with advances in digital technology. He urged the officers to use social media platforms to communicate the right information. He also said that training of officers in cyber security must be given utmost priority. He expressed hope that the officers will gain knowledge from this two-day conference and practise the lessons learnt here, in their professional lives.

Shri Rajiv Jain, Director, Intelligence Bureau said that he has high hopes from the young officers and he is sure that they will achieve greater heights in their future.

Dr. Meeran C. Borwankar, DG, BPR&D said that this is for the first time that such a conference is being held. She said that for effective policing, the police and CAPFs must make good use of two partners, citizens and technology. She said that from DG level to beat constables, the concept of taking community along, is being followed. On behalf of Central Government, DG, BPR&D said that MHA is doing its best to increase the technological inputs in the training programmes.

During the inaugural session, three presentations were given to showcase the use of best practices in policing by using technology.

The conference included sessions on topics like Technology for Police, Operations and Technology and Police-Media Interface.

Admissions at LPU are closing on 10th August 2017