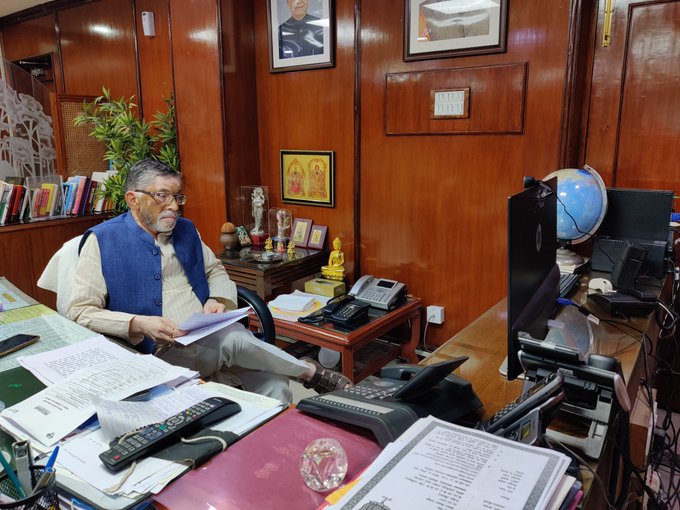 New Delhi: Minister of State (I/C) for Labour and Employment, Shri Santosh Gangwar today introduced three Labour Codes in the Lok Sabha heralding the path of game changing labour welfare reforms in the country. These bills are (i) Industrial Relations Code, 2020, (ii) Code on Occupational Safety, Health & Working Conditions Bill, 2020 (iii) Social Security Code, 2020. While introducing the bills he mentioned that the Code on Wages has already been approved by Parliament in the month of August, 2019 and has already become the law of the land. Along with this, three Bills introduced today will pave way for simplification of labour laws, its implementation and will bring immense labour welfare measures to the 50 crores workers in the country, both in the organised and unorganised sectors.

Shri Santosh Kumar Gangwar also said that on the recommendation of the second National Commission on Labour that the existing Labour Laws to be merged into fewer Labour Codes, Government started the work on these lines. “Since 2014 elaborate exercise of consultations with all stake-holders was undertaken. As a result, 29 Central Labour Laws are proposed to be reduced to just 4 Labour Codes” Shri Gangwar added.

He also mentioned that these Codes will also bring the industrial peace and harmony in the country which will immensely help the country in bringing much needed economic growth and will help in employment generation.

The Minister further mentioned that these introduced Bills will also help the employers which will bring the investment and will create harmonious industrial relations in the country. He further said that to help the harmonious industrial relations, we need to balance the interest of all stakeholders. Further stated that t 73 years, after independence we are now bringing much needed labour reforms in the country in a big way.

25 products showcased at GI Pavilion set up by DPIIT at…

The Minister also said that these reforms will really protect the interest of workers and will provide them social security, protection, safe and working environment and effective conciliation, mechanism for their grievances, if any left. He further mentioned that in these labour codes, a proper balance is maintained between the interest of workers and the employers because then only a labour welfare can take place in true sense.

A statutory right has been created for minimum wages and timely payment of wages to all workers whether in organized or unorganised sector. It extends entitlement of minimum wages to all the workers in the country as against 30 per cent of the workforce, at present. At present, minimum wages are fixed for employment covering mainly mines sector, plantation, dock workers, building and construction workers, watch and ward, sweeping and cleaning and on manufacturing sector etc. Extension will take place to entire service sector (IT, hospitality, transportation etc.), domestic workers, unorganized workers, teachers.