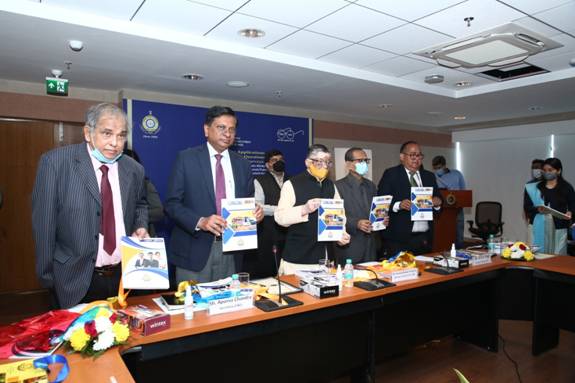 Speaking on the occasion, Union Labour Minister said that data on all aspects of labour is crucial to serve as inputs in policy making especially in times of the COVID-19 pandemic. The five All India surveys on migrant workers, domestic workers, employment generated by professionals and transport sector have tremendous role to play at national level by providing data on the most effected labour market participants. The Minister lauded the efforts of Shri Apurva Chandra, Secretary, L&E and Shri DPS Negi, Director General, Labour Bureau for their steadfastness and exemplary role which have finally culminated in the launch of four All India surveys.

Secretary L&E Shri Apurva Chandra informed that the Government has constituted an Expert Group under the chairmanship and co-chairmanship of Dr. S. P. Mukherjee and Dr. Amitabh Kundu respectively with leading economists and statisticians as members to guide Labour Bureau for conducting these surveys. The Expert Group has so far conducted forty-six meetings of the group and Sub-Group to finalise the questionnaire, instruction manuals and sampling designs of these surveys. He stressed that this is the first time that the Bureau will collect data through greater use of information technology which will enable it to effectively meet the rapid demands for data in the field of labour and employment. He said, surveys will be conducted using AI based technology intervention with Speech-to-Text facility along with Geo-Fencing Technology, Travel Schedule, Message Broadcast functionalities inbuilt. He added that real time reporting and monitoring with advance dashboards, command and control centre are also being developed.

Director General, Labour Bureau Shri D.P.S. Negi, emphasized on the use of Artificial Intelligence and Machine learning with data storage in cloud computers along with geo tagging to enhance the data collection, assimilation and processing. He also stated that these ambitious surveys will provide a comprehensive picture of the employment scenario in the country thereby formulating sound National Employment policy of the country.

Education New Zealand taps into global market of over 15…

The Labour Bureau is entrusted with five All India surveys

All India Survey of Migrant workers,
All India survey of Domestic Workers,
All India survey of employment generated by Professionals,
All India survey of employment generated in Transport Sector and
All-India Quarterly Establishment based Employment Survey
The surveys are also significant in terms of the path-breaking initiative being taken by Bureau in terms of use of Information Technology (IT) in the entire chain of data collection to report generation. In a pioneering move, all across the country, data under all the surveys will be collected through IT enabled software using handheld electronic devices and will be stored and processed electronically. The IT interventions in conduct of surveys will reduce the completion time of surveys by at least 30-40%. The Bureau will engage an IT partner for providing the technological support for these surveys. This success of Bureau in utilisation of this innovative technology will be worth emulating by other agencies involved in similar survey works.

The Bureau is also gearing up to take up its role as the nodal agency for collating statistical returns under all the four labour codes. For the last hundred years Labour Bureau has been at the forefront in fulfilling the data needs of various stakeholders in the field of labour & employment. Besides being the repository of data on labour, the Bureau is also nationally and internationally renowned for compilation and generation of vital statistics like the Consumer Price Index for Industrial Workers (CPI-IW) the base of which was recently revised to the year 2016, Consumer Price Index Numbers for Agricultural and Rural Labourers (CPI-AL/RL) and for undertaking numerous surveys and studies on different aspects of labour.