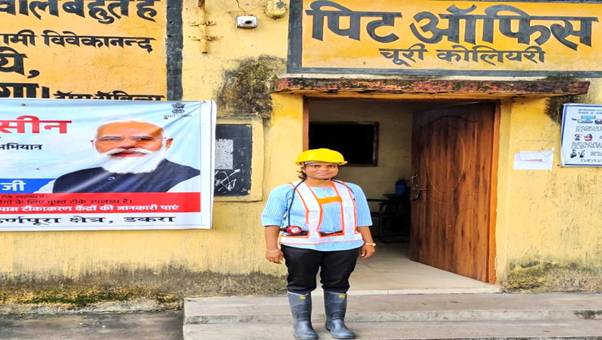 New Delhi: Union Minister of Coal, Mines and Parliamentary Affairs Shri Pralhad Joshi has congratulatedMs. AkankshaKumari, the first ever woman mining engineer of Central Coalfields Ltd under the Ministry of Coal. In a tweet, the Minister complimented AkankshaKumari for becoming the first ever woman mining engineer to work in an underground mine atChuri, North Karanpura area of Central Coalfields Ltd.

Shri Joshi said that AkankshaKumari’s achievement is the true example of progressive governance to promote gender equality and generate more opportunities by the present Government under Prime Minister Shri Narendra Modi by allowing women to work in underground coal mines.

AkankshaKumari, a mining graduatehas joined the Churi underground mines, in North Karanpura area of Central Coalfields Limited(CCL). In the process, she became the first woman Mining Engineer to join CCL. Women employees have been shouldering the responsibilities ranging from officer to doctor to security guard and even running heavy machines like dumper and shovel and have excelled in each role. However, this is the first time when the core mining activity of one of the biggest coal mining companies of the world will witness this progressive change. The enormity of her achievement can be gauged by the fact that Akanksha is the second mining engineer in the Maharatna conglomerate Coal India Limited and the first woman to work in an underground coal mine.

A resident of Barkagaon in Hazaribagh district, Jharkhand, Akanksha completed her schooling from NavodayaVidyalaya. Belonging to a mining belt she witnessed coal mining activities from close quarters and was enamored by it since her childhood. Thus, she developed a natural inquisitiveness towards mines and its activities since childhood, which led her to opt for mining engineering at BIT Sindri,Dhanbad.