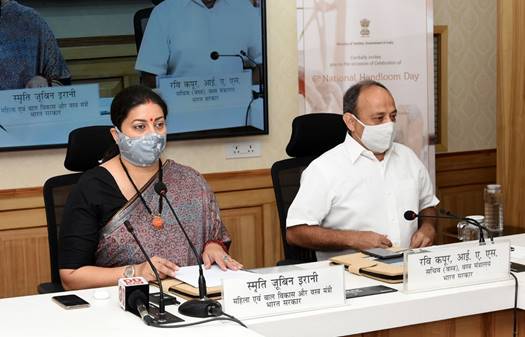 New Delhi: Union Minister of Textiles and Women & Child Development, Smt Smriti Zubin Irani has extended her greetings on the occasion of the 6th National Handloom Day today. Addressing a function organized in virtual mode by the Ministry of Textiles, Government of India to celebrate National Handloom Day today, Smt Smriti Irani thanked Prime Minister Shri Narendra Modi for declaring 7th August every year as National Handloom Day for the first time in 2015, 110 years after the Swadeshi movement which started on this date in the year 1905. Paying obeisance to Mahatma Gandhi, Smt Smriti Irani said that independence for India was achieved with the help of the spinning wheel. Chief Minister of Himachal Pradesh Shri Jairam Thakur was present through virtual mode from Kangra.

On this occasion, Smt Smriti Irani launched the Mobile App & Backend Website for Handloom Mark Scheme (HLM). The Minister said that the Handloom Mark is being promoted to provide collective identity to the authentic handloom products. Textiles Committee Mumbai has developed the Mobile App with a backend web portal to completely digitise the process of registration. The App is in English and 10 Indian languages and will enable the weavers located at any corner of the country to apply for Handloom Mark registration through the comfort of their homes by click of a button on their mobiles. This app helps ascertain the genuineness and originality of the product through unique and dynamic QR code labels affixed on each handloom product.

The Union Minister of Textiles also launched the “My Handloom” portal for individual weavers as well as other organizations for applying for various benefits under the various handloom schemes like Block Level Clusters, Handloom Marketing Assistance and Awards. Inaugurating the portal, she thanked Prime Minister Shri Narendra Modi for launching the “India Handloom” brand in 2015 on the occasion of the 1st National Handloom Day. She said that till now, 1590 products have been registered under this brand, which has more than 180 product categories. The portal with a single “sign-in” is to act as One-stop shop for information on all handloom schemes which will retain information, and will ensure transparency and provide real-time status update on applications under National handloom Development programme, as also the information on various schemes/interventions such as Mudra Loan Scheme, Weavers’ Insurance, Yarn Supply, distribution of looms and accessories, number of trainings, etc. An Online lottery System for transparent allotment of stalls for various events such as melas, Dilli Haats, etc. has been introduced. The portal will be linked to e-office and DBT portal.

The Union Minister of Textiles also inaugurated the virtual Indian Textile Sourcing Fair 2020. In the face of the unprecedented Covid-19 pandemic, and inability to hold conventional marketing events such as exhibitions, melas, etc. the Government is providing online marketing opportunities to weavers and handloom producers. By taking a step towards realizing “Atmanirbhar Bharat”, Handloom Export Promotion Council is organizing the Virtual Fair. The fair will connect more than 150 participants from different regions of the country showcasing their products with unique designs and skills. The Indian Textile Sourcing Fair will be open on 7, 10 and 11th August 2020. The show has already attracted considerable attention of the International Buyers.

A presentation was made on Craft Handloom Village, Kullu, being established in association with District Administration, Kullu. Speaking on the occasion, Chief Minister of Himachal Pradesh, Shri Jai Ram Thakur expressed gratitude at being able to showcase the handlooms of Himachal and said that handlooms are a symbol of the state’s traditional and ancient heritage. He said that the state is making efforts to implement One District- One Product scheme so that the both the districts and products are able to carve out a distinct identity of their own.

AICTE to develop curriculum for Bamboo Engineering and…

To mark the occasion and to instil pride of workmanship of handloom weaving amongst citizens, a two-week social media campaign has been launched for the handloom weaving community. Smt Smriti Irani has appealed to the all Hon’ble Ministers in the Council of Ministers, Lieutenant Governors, Hon’ble Chief Ministers of States and Hon’ble Members of Parliament of Lok Sabha and Rajya Sabha and eminent Industrialists with friends and family to express solidarity with the weaving community through their social media accounts so as to motivate others to do the same.

Ministry of Textiles has extended a similar request to Secretaries to the Govt. of India and equivalent level officers. Besides, all the Secretaries of the States, Exports Promotion Councils, Sister Textile Bodies like Central Silk Board, National Jute Board have been requested to amplify the Social Media Campaign under the common hashtag and inspiring associates and employees to embrace handloom fabric. The e-commerce entities, Retail Companies and Designer Bodies have also been requested to promote and amplify the efforts of Ministry of Textiles to promote Handloom products.

Further, to promote Handloom under media campaign with common hashtag #Vocal4Handmade has been started to promote Handloom, Handloom Products, information about high end handloom products of various regions of the country, their manufacturers, encouraging weavers/artisans to tweet and to publicize and promote the sector amongst common people.

To promote Handlooms in a big way, Ministry of Textiles has undertaken many new initiatives. Steps have been taken to on-board weavers/producers on Government e-Market place (GeM) to enable them supply handloom products directly to Central Govt. Departments.

Ministry of Textiles is also facilitating formation of Producers Companies across the country in the handloom sector as a thrust area with the objective to extend the benefits of various handloom schemes to the weavers/workers, in particular to those who are either working independently or in the fold of Self-Help Groups/Producer Groups.

Narendra Singh Tomar,Piyush Goyal along with other dignitaries flagged off first “Kisan Rail”

Prime Minister Narendra Modi will inaugurate #TheIndiaToyFair at 11 am, today