Addressing the participants shri Goel said that this is not just any other run but we are running for a better tomorrow, a New India where each youngster utilizes his/her skills for nation building.

Shri Babul Supriyo gave a thumbs up to the Sports Ministry’s initiative of Slum Yuva Daud and called it “innovative step” to tap young talent.

Shri Ramesh Bidhuri appreciated the Sports Ministry’s initiative and encouraged the children to participate in run wholeheartedly. The Singh Sisters urged the youth to participate in sporting activities and promote healthy living and cited sports and youth as two pillars of India’s strength.

The Slum Yuva Daud is part of the Adopt Slum Campaign initiated by the Ministry of Youth Affairs and Sports and Nehru Yuva Kendra Sangathan which aims at highlighting the government’s pro-people schemes among masses. Goel further stated that the “Adopt a Slum” campaign will involve groups like NSS, public schools, RWAs, NGOs, rotary clubs etc. Total 11 Slum Yuva Runs have been planned out of which 8 have already been successful with mass participation of youth from various Delhi slums.

S.P. Mandali’s WeSchool felicitates 10 Global Personalities who have made a mark in India’s Socio-Economic and Cultural growth through the ‘Friends of India’ initiative 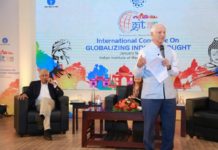 University News January 18, 2020
0
The University congratulates all students who have received offers, either through the latest VTAC round, earlier and subsequent rounds, and the many who have...

University News January 18, 2020
0
La Trobe’s commitment to the environment has been recognised with the University named first runner-up for the Green University of the Year category at...