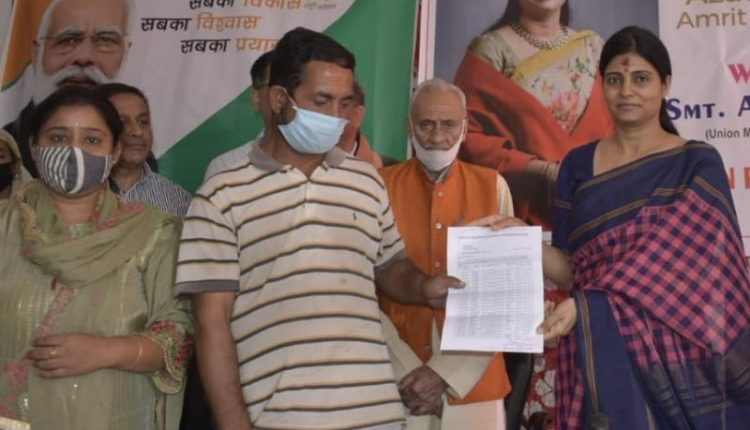 On the second day of her tour, the Union MoS visited Panchayat Saranoo of Block Dhangri and interacted with the women PRI and general public. The PRIs and the locals raised several issues and demands about different sectors.

In her address, the MoS said that J&K is heading towards a new era of development and prosperity and witnessing a wave of positive change with the Government taking several reformative measures for socio-economic development, besides empowering the people of the UT.

The Minister said that the Union Government is committed to ensuring transparency and accountability in its functioning which are necessary for democratic and participative governance, as they help build trust and improve the impact of schemes.

Describing the objective of her visit, she informed that the special public outreach by the Central Government to JK UT has been launched to take first-hand account of the public grievances at their doorsteps and ensure better implementation of the Government schemes on the ground.

“All efforts are being made to bring JK into mainstream development and several schemes have been launched in this regard”, she said.

Terming the 3-tier system a boon for democracy, Smt. Patel said that the system is playing a crucial role in strengthening democracy at the grassroots level as the people themselves are now formulating the plans as per the needs of their areas.

While enumerating the steps being taken to encourage investment and promote industrial development in the UT, she informed that in a major decision, the Government of India has approved a new Industrial Developmental Scheme for Jammu and Kashmir.

“To tap the export potential of agricultural and industrial products, the Government is engaging with states and union territories to implement the Districts as Export Hub (DEH) initiative in all districts of the country”, she informed.

She further informed that under the DEH initiative, District Export Promotion Committees (DEPCs) have been constituted in most of the districts and products/services with export potential have been identified in each district.

“The scheme will go a long way in ushering an era of socio-economic development of the region and for catering to the aspirations of people and it will also provide impetus to Micro, Small, Medium and larger enterprises”, she informed.

She informed that an Industrial land bank has been established for Industrial Growth and 6000 acres of land has been acquired.

“Under this new Industrial policy, 4.50 lakh unemployed youth would be provided employment”, the Minister informed.

While stressing on export promotion, the MoS said that it will play a considerable role in employment generation and asked the concerned to make a suitable district export plan to make the district an export hub of indigenous products.

She said as Rajouri has immense potential in dairy and other sectors, we are working on a multi-pronged strategy on value addition and proper market linkage of the indigenous products to raise the per capita income of the district. She also advised the District Administration to involve youth in these sectors as they have immense potential which will help achieve the desired outcomes.

Enlisting the measures taken for Ease of Doing Business, Smt. Patel apprised that necessary steps are being taken to make Jammu and Kashmir a point of attraction under industrial investment.

Regarding granting ST Status to the Pahari tribes, the Minister assured to put the demand before the Ministry of Home Affairs.

Reiterating the Centre’s commitment, its strong resolve and special concern for the upliftment of the youth and women empowerment, she said that much emphasis is being paid on enabling and empowering youth and women to be skilled and creative and provide innovative solutions in every sphere for building an ‘Atmanirbhar Bharat’.

During her visit to the Gyan Public School, the Minister participated in the Azadi Ka Amrit Mahotsav celebration where she paid rich tributes to all those who had made supreme sacrifice in the lines of duty.

She also honoured the Nok and veer naris of the brave hearts who had sacrificed their lives in protecting the integrity and sovereignty of the country.

Smt. Patel said that Jammu and Kashmir is the land of unlimited potential and opportunities and several steps are being taken to unleash the potential.

The Minister also handed over sanction letters under PMAY-G, Horticulture scheme, PMEGP and trout culture besides distributing Golden cards among the beneficiaries.

She also interacted with the DDC members, BDC Chairpersons, Sarpanchs, Panchs and the general public who apprised her about many issues and demands.