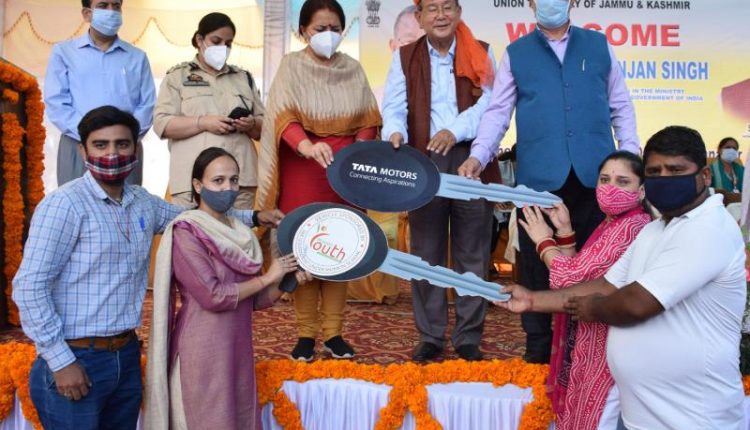 The Union Minister also inaugurated water supply scheme Thakey and Koharmarg under NABARD in Block Parlidhar. He also laid the foundation stone for improvement of road from Bari to SC village and construction of road from Shiv Temple to Barta High School under NABARD.

After the inauguration, the Minister took a round of departmental stalls established for awareness of general public about various schemes.

The Minister interacted with staff members and beneficiaries of the scheme and had a detailed review of implementation of schemes on the ground and also took feedback from the beneficiaries.

While addressing the gathering the Union Minister said that after abrogation of Article 370 from J&K, many changes are visible in the field of development like completion of mega projects, progress of ongoing developmental works and implementation of different centrally sponsored schemes in J&K. He said that the present dispensation is trying it’s best to bring Jammu and Kashmir on the glorious path of development.

Dr Ranjan expressed satisfaction over implementation of several government schemes in the district. He appreciated the efforts of district administration as well as various departments for effective implementation of government schemes on ground. Union Minister appreciated the wonderful arrangements made by District Administration with chance given to every one who wanted to put a point across.

Regarding the establishment of 3rd tier of Panchayati Raj system in the UT, the Union Minister observed that with the establishment of Panchayati Raj Institutions the developmental process accelerated with full zeal and dedication for the socio economic upliftment of common people. He said that the government is committed to empowering Panchayats through devotion of funds, functions and functionaries as local representatives are well aware of needs of their areas and can resolve the issues on priority with the best solution.

Commenting on the natural assets and scenic beauty of J&K, Dr Ranjan said that Jammu region has huge tourism potential as well as potential of channelizing the local produce of vegetables into an organized venture.

While underscoring the importance of New Education Policy 2020, he added that the new policy paves the way for reforms in the education sector and the government is committed to provide quality education to the students.

Regarding Jal Jeevan Mission scheme, the Minister informed that JJM is centrally sponsored schemes launched by the Government of India with objective to provide 100% tap water to all households. The Union Minister also praised Sh Sunil Kumar a government school teacher from Udhampur district who got best teacher award at National level.

During the camp, DDC Chairperson, DDC Vice Chairperson, BDCs, DDCs and PRIs besides a large number of the general public hailing from different adjoining panchayats of Block Ramnagar attended the public outreach programme and projected several demands before the Minister.

While responding to the demands of PRIs, the Minister assured that all the demands of the area will be fulfilled on priority basis. During the camp, renowned local Artist Romalo Ram and party presented theme based cultural items which were highly applauded by the Union Minister as well as the audience.