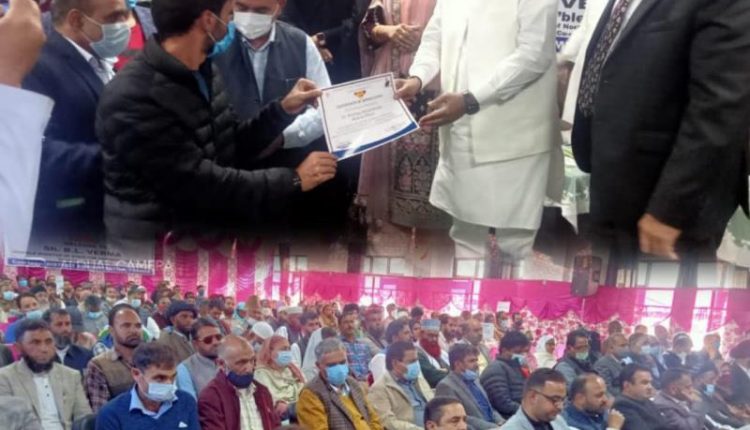 Speaking on the occasion, the Union Minister said that the purpose of his visit in the remote region is that, Prime Minister wants his ministers to assess the ground situation and take the feedback from the public & PRIs so that corrective measures are taken to make the public life comfortable.

Shri Verma said that J&K is moving in the right directions and the Prime Minister is supporting the UT in every respect to take the regions at par with the rest of the country in terms of prosperity.

Reiterating the initiatives taken by the government to secure the livelihood of youths and women under the umbrella of mission youth, the union minister urged the youth to avail these schemes by registering themselves with mission youth and concerned departments.

The Union Minister said that there has been perceptible change observed since Modi government has taken over. 43 crore Jaan-Daan Bank accounts have been opened up in the country which brings transparency and stops the old practices of corruption and pilferage from government scheme meant for common man.

Sharing the PM’s vision and determination the Minister said ‘Sabka Sath Sabka Vikas’ is not merely a slogan of P.M but a noble mission, that surely bring a Paradigm Shift in the Socio economic conditions of the weaker section of the society. He said that special hand-holding of youth and under–privileged will change the narrative among the youths and will also help in making the lives better and reduce alienation among youth.

With the active role of PRIs and their suggestion the functioning of Cooperative societies in the district can be taken to new heights and uplift the members economically to make them self-reliant for that we should work in cohesion and collective manner’’ Union minister added.

Earlier, District Development Commissioner briefed in detail the socio economic profile of the district and also informed the Minister about various achievements registered under different schemes.

Youth Associated with JK Mission youth and SHGs under Umeed schemes also met the Minister and shared their experience and success stories which got appreciation and acknowledgment from Minister.

The Union Minister gave patient hearing to all delegations individual and assured them of positive response from the union government with regards the redressal of their grievances.