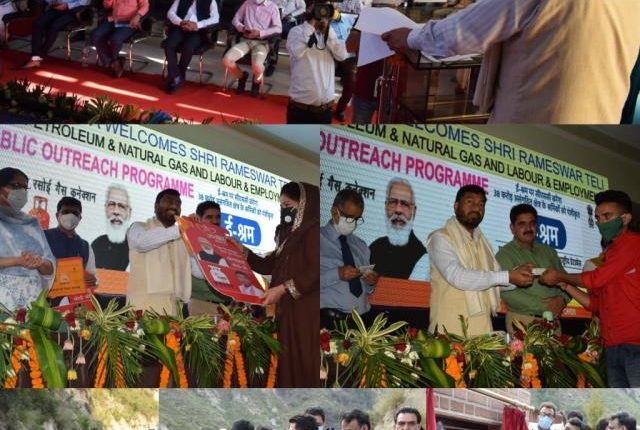 The Union MOS distributed sanction letters of LPG connections under Ujjwala-2.O, e-Shram cards among scores of beneficiaries and Covid Care relief cheques identified under Atal Bhimit Yojana at Community Hall Doda, besides inaugrating the newly widened Ghat road stretch of 4 km constructed under CRF at an estimated cost of 813 lacs.

While addressing the gathering, the Union MOS congratulated all the beneficiaries especially the females for getting rid of the traditional fuels that cause health problems.

He further said that the Government of India under the able leadership of Prime Minister, Narendra Modi has taken series of initiatives particularly for the UT of J&K to ensure the overall development of the UT.

During his speech, the Union MOS counted numerous developmental and individual benefit measures that his ministry has taken which include establishment of hospitals for the working class, laying of gas pipeline, upgradation of schools, creation of de-addiction centres, upgradation of ECIS hospitals, registration of un-organised workers on e -shram portal and sanction of LPG gas connections to the women of BPL families under Ujjwala-2.

The Union MOS directed all the Oil companies to ensure that no family shall be left out without LPG facilities, and also to register all the unorganised workers on e-shram portal. He also asked the locals to submit the applications for the sanctioning of Petrol pumps as per the required specifications.