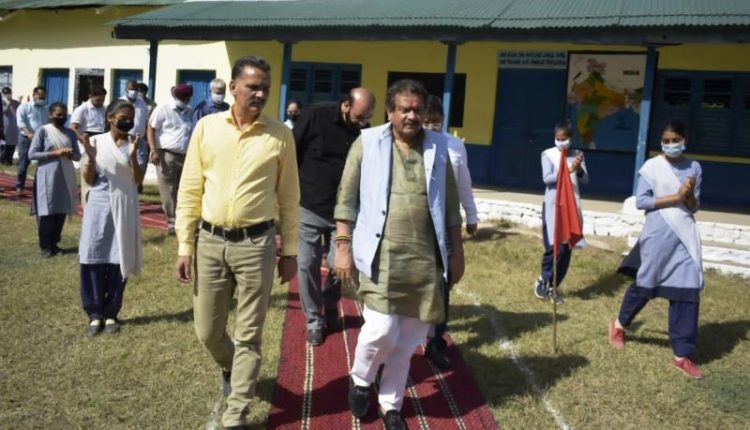 RAJOURI : The two-day visit of the Union Minister of State for Law and Justice, Shri. S.P Singh Baghel as a part of the public outreach initiative to JK UT concluded today here in Rajouri.

On the second day of his tour, the MoS visited Town Hall Rajouri where he facilitated and honoured the Safai Karamcharis for their tireless efforts in keeping the city clean and thereby contributing to the Swachh Bharat Mission. He also facilitated the beneficiaries of PMAY-U there.

At Balidhan Bhawan, the Minister while interacting with the public said that the Union Government is making best efforts to ensure that benefits of development reach all sections of the society without any discrimination and make the delivery system of welfare programs more effective with accountability and transparency in the administrative machinery.

“There is no dearth of employment in the Government sector but the students should be able to grab the job opportunities”, said the Minister. He advised the students to work hard to achieve their desired goals in life.

During his visit to the High School Tatapani, the Minister interacted with the students and staff and stressed upon the teachers for providing quality education to the students.

While inaugurating the up-gradation of the changing room facility at Tattapani hot spring, the Minister advised the concerned to take concrete measures for better beautification of the hot spring as it has immense medical tourism potential. He also asked for putting the project in District Capex for more development of the spot.

The Minister also interacted with the public and their representatives at the PWD Dak Bunglow, Kalakote who apprised him of several issues and demands of their areas.

In his address, Shri Baghel said that the Central Government is concerned about the devolution of powers and concrete steps are being taken to strengthen the democracy at the grass-root level.

Reiterating the Centre’s commitment, its strong resolve and special concern for the overall development of J&K UT, Shri Baghel said that numerous initiatives are being taken to bring transformation in every sector to help the UT march towards a golden future.

“J&K is moving forward on the path of integrated equitable development with the establishment of the three tier system of Panchayat Raj”, the Minister said.

While talking about water scarcity, the Minister said that there is no dearth of water resources but the need of the time is to tap them to ensure adequate drinking water facilities to the general public.

“Terrorism has no religion and people of Rajouri and Poonch districts are the victims of cross border shelling and cross border terrorism but they fought bravely with the antisocial elements”, said the Minister.

Regarding the resolution of public grievances concerning the PDD sector, the Minister asked for setting up a grievance cell exclusively for the power sector so that the genuine public issues can be redressed in time.

The Minister also said that several welfare schemes and programmes including PM Ujjwala Yojana, Jivan Bima Suraksha Yojana, Jeevan Jyoti Yojana, PM Kisan, Ayushman Bharat and others have been launched by the Government and urged upon the public to avail the benefits of the same.