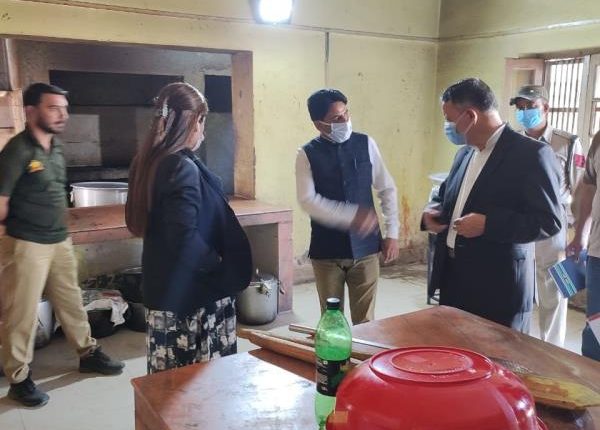 During the first day of his visit, the Union Minister visited the Jai Valley where he interacted with representatives of various groups and listened to their issues.

The Union Minister administered Swatchta Pledge to the gathering, lead the cleanliness drive at the venue and also planted saplings of Chinar and Deodar in the Jai Valley under the ongoing ‘Azadi ka Amrut Mahotsav’.

On way from Jai Valley to Bhaderwah, he also laid the foundation stone of Nagar Van forest enclosure at Sungli Bhaderwah.

While speaking on the occasion, the Minister said that the Central Government under the dynamic leadership of PM Modi is working tirelessly for the betterment of even the last person in the queue. He also said that collective efforts are imperative to achieve the idea of One Nation and India as a nation has all the capabilities to lead the world being the largest democratic setup at the global level.

He also said that after the abrogation of Article 370, the people of the UT are now receiving numerous benefits from various welfare schemes which were not given to them in the earlier set-up. He added that the Union Government under PM Modi will leave no stone unturned to ensure the overall development of J&K.

With regard to the development of the tourism potential of the area, the Minister assured that under the various schemes, all the locations of the district especially of Bhaderwah area will be alleviated at par with the tourist locations of national repute so that unemployed youth shall be provided with the opportunities to earn their livelihood in dignified manner.

Moreover, he assured that all the issues which were raised before him shall be addressed with utmost priority and he shall also take the issues with the other ministries for their fast track disposal. He also directed the Director Tourism Jammu to tour the whole area and to prepare a blueprint for the upgradation of the tourism sector in the region and to submit the same to his office.

Earlier, DC Doda presented the welcome address in which he highlighted the tourism potential of the district especially of the Bhaderwah area.

The DDC Chairman Doda, representatives of PRI, BDC Chairperson, DDC members also spoke on the occasion and briefed about the issues and challenges of the area.

On arrival at Teligarh resort Bhaderwah the Union Minister also met with various deputations and listened to their demands. The Minister assured that the grievances and issues shall be forwarded to the concerned authorities and followed till they are resolved on merit.