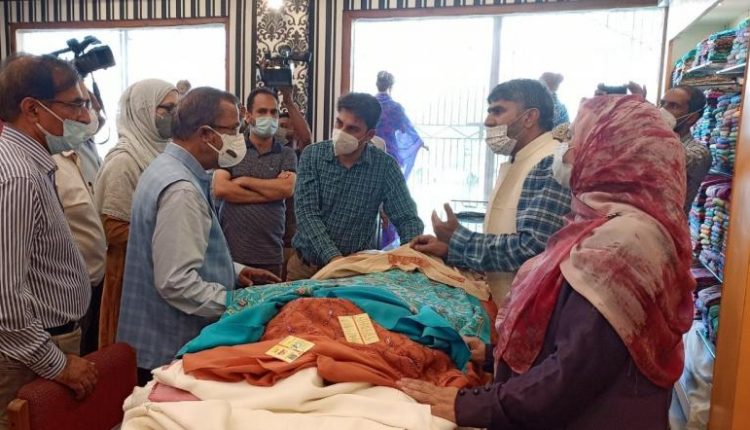 SRINAGAR : Union Minister of State for Industries and Commerce (I&C), Shri Som Parkash today chaired a meeting to review the performance of I&C department of Jammu and Kashmir at SKICC, Srinagar.

During the meeting, Shri Parkash highlighted that Jammu and Kashmir has a vast potential for the industrial sector and the present government under the leadership of Prime Minister, Shri Narendra Modi has initiated several schemes to tap that potential.

The Minister said that the New Central Sector Scheme for Industrial Development of Jammu & Kashmir announced by the Union Home Minister with an outlay of Rs. 28,400 crores is one of the best schemes for the overall development of this sector in the Union Territory of Jammu and Kashmir. He added that the central government is committed to develop the industrial sector in J&K with an aim to create employment avenues for the youth of J&K.

Underlining the need for publicizing the objectives of the new central sector scheme, the minister impressed upon the officers of I&C department to utilize all possible avenues for conveying objectives of new policy to the people of J&K so that more people are made aware about the scheme and hence avail due benefits from it.

While reviewing the progress on Prime Minister’s Employment Generation Programme (PMEGP) and Industrial Development Scheme (IDS), Shri Prakash directed the officers to ensure that all the cases should be disposed-off timely and pendency of cases be reduced. He impressed upon proper hand holding of the budding entrepreneurs and constant facilitation of them at each level.

Works on Tawi Barrage to be completed in 10 months; Tawi…

During the meeting, Director I&C, Kashmir, gave a detailed presentation on the achievements and progress of I&C department.

The minister was apprised that under the PMEGP, 2371 units have been established in 2021-22 with an amount of Rs 5291.47 lakhs margin money/subsidy disbursed among them.

Meanwhile, the Union Minister also paid a visit to Silk Factory, Rajbagh and reviewed its functioning.

While interacting with the staff at the factory, the minister asked them to manage production on modern lines with introduction of new product ranges which are trending in present markets besides the marketing networks of the factory should be strengthened to make it compatible with the present fashion industry.

The Union Minister appreciated the efforts of I&C department in creating this unique factory having end-to-end market solutions especially for the raw materials available in J&K.

During the visit, the minister also interacted with the Artisan clusters of Willow wicker, Paper machie, Crewel and Wool.

Works on Tawi Barrage to be completed in 10 months; Tawi Artificial Lake Project to…