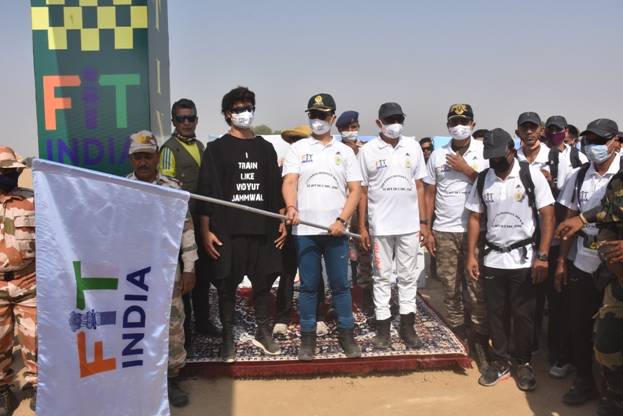 The event has been organised by Indo Tibetan Border Police (ITBP) and will go on for 3 days in which over 100 ITBP jawans and personnel of various central armed police forces (CAPFs) are walking for over 200-km.

The walkathon march will continue day and night and will also pass through the dunes of the Thar desert in the area located along the India-Pakistan border.

For most of the part during the march, the track runs along the International Boundary known for many battles and war , with Kishangarh Fort being a prominent location en-route.

Simple Energy partners with C4V to set up cell manufacturing…

Achieving Universal Health Coverage in India: The Need for…

Sports Minister Shri Kiren Rijiju also walked the first few kilometres of the walkathon along with the forces and said “It is the vision of our Prime Minister to make the Fit India Movement into a people’s movement and take it to every corner of the country. The forces themselves are fit but by walking 200km on the borders of Jaisalmer they aim to motivate every citizen of the country that if they can cover 200km as a walkathon, every citizen can take up fitness in one form or the other.”

Actor and fitness Icon Vidyut Jammwal further added “this is a great initiative that the government is taking, and for Fit India to reach every nook and corner of the country, it is not enough to have fitness events only in urban centres or in big towns but actually take it to every small place. With this event being organised in the desert, it goes to show that the government is serious about taking this initiative to every nook and corner.”

‘Fit India Walkathon’ aims to create awareness about fit and healthy lifestyle in India and comes on the heels of recently concluded ‘Fit India Freedom Run’ that saw the participation of over 6.5 crore people across India.