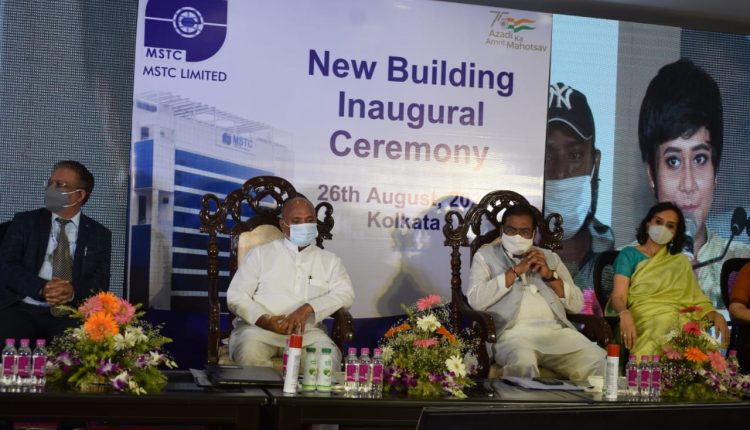 Congratulating the MSTL officials for owning its own building in the city, the Minister said, MSTC’s new corporate building is a state of the art construction incorporating the latest features.

Shri Singh said, MSTC, started off as ‘Metal Scrap Trade Corporation Limited’ has transformed to become number one e-commerce player, providing specialized solutions for e-auctions to state and central governments. He said that the government has taken several environment-friendly initiatives and also is working towards the mission of green steel.

Today, MSTC has been the appreciated e-commerce service provider for the Central and State Governments for their flagship projects, viz. Spectrum Auction, Coal Bloc Auction, Mines and Mineral Auctions, Sand Mining Bloc Auctions, Projects like UDAN, bidding platform for export & import of petroleum products, strategic as well as Asset Sale of sick CPSEs and other Government Departments through D1PAM and many more such domains where MSTC has made its presence felt in a big way. It is also providing e-auction services to large No. of PSUs as well as few big Private sector organizations. The total transaction volume of business in the last FY (2020-21) was more than 1.25 Lakh Crore. The total revenue from operation was Rs. 428 Crore and the Profit after Tax was 101.07 Crore.

The total covered area of the newly inaugurated building is approximately 55000 sq.ft. The building is 11 stories high with Ground plus 10 floors. Built at a cost of around Rs. 55 crore, it is certified as a Green building by IGBC (India Green Building Council). The corporate building of MSTC is a Steel intensive structure with minimum use of concrete. Furthermore, the Building has intelligent building management system (IBMS) wherein all the services like security surveillance, AC, internal lighting, lift, and fire fighting and fire detection system are integrated to the building management system. It has Solar panels on the rooftop to generate electricity and LED lights have been used extensively to minimize energy consumption. Keeping in view that conservation of water is of paramount importance, the Building consists of Rain Water Harvesting System.

University of Exeter: UN Climate Champion to speak at Exeter event on…

iednewsdesk May 20, 2022
How business leaders can access scientific data to identify and address the global risks from climate change will…

University of Exeter: Satellites and drones can help save pollinators