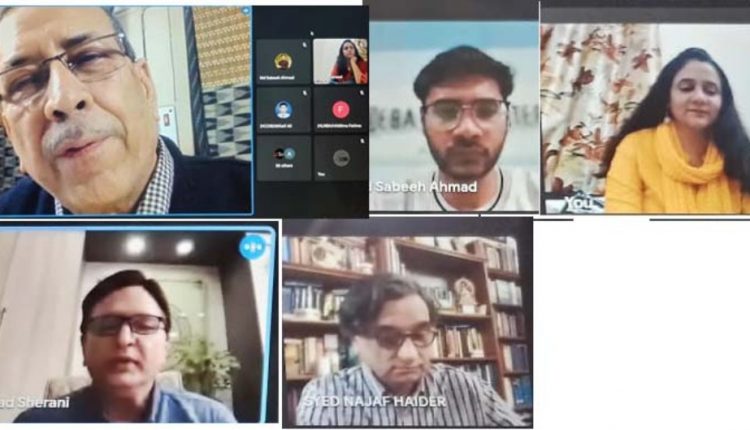 Aligarh : Deliberations on multiplicity of Indian languages and narrations of Mughal era through paintings were made in the lectures of the two-day online webinar of the Aligarh Muslim University (AMU) Debating and Literary Club in line with the ‘Ek Bharat Shreshtha Bharat’ programme of the Government to enhance interaction and promote mutual understanding between people of different states and Union Territories.

Speaking on ‘Linguistic Diversity of India and the Role of Mother Language’, Prof S Imtiaz Hasnain (Department of Linguistics) said: “Since linguistic diversity is increasingly being threatened, it is essential to explore the potential role of technology to advance multilingual education and support the development of quality teaching and learning for all”.

He spoke on the importance of mother tongue and emphasised the crucial role of native languages for improving critical thinking skills, second language learning and literacy skills.

Prof Imtiaz discussed case studies on mother tongue and stressed that the New Education Policy (NEP) will bring the required change to break the taboo of English being the language of elites.

In the concluding remarks, Dr Sadaf Fareed (President, University Debating and Literary Club) said that language is our identity and by compromising with the mother language, we suffer the loss of identities.

She extended gratitude to Prof Imtiaz Hasnain for enlightening the participants.

University of Oxford: Major boost for Oxford’s mission to…

He spoke at length about how newer research has enhanced our understanding of the varied aspects of Mughal art.

Prof Haider deliberated the realism and symbolism present in Mughal paintings with discussions on pertinent paintings of the Mughal era.

“The language of art is not an easy one. It is powerful to those who understand it, and puzzling to those who do not. But the human mind has always been expressing its emotions and experiences by spinning symbolism and abstraction together”, said Dr Sadaf Fareed in the concluding remarks.

Abdullah Parwaiz (Coordinator of Forums and Workshops, University Debating and Literary Club) inaugurated the proceedings on the second day of the online programme.

University of Oxford: 50-year project reveals new insights about the evolution and…