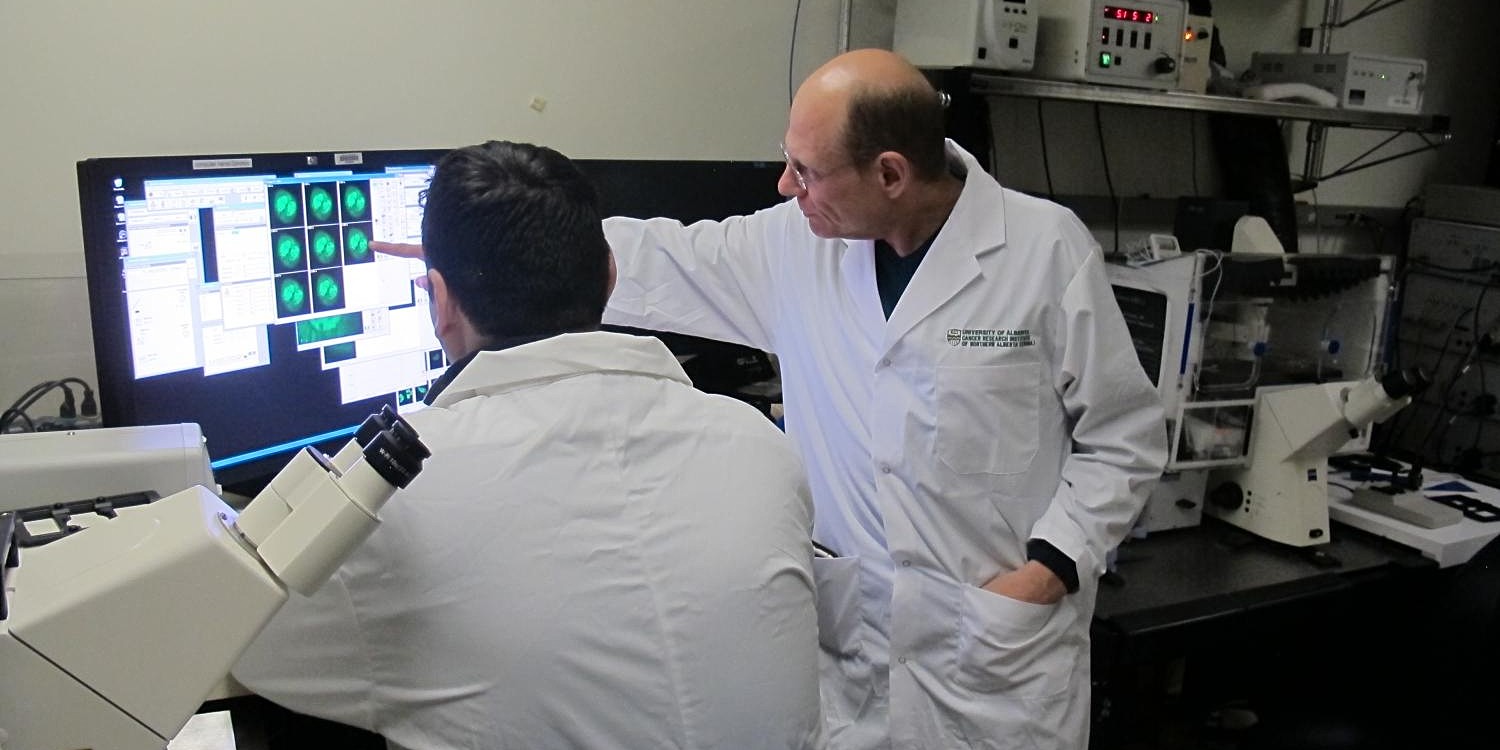 University of Alberta researchers discover one of our cellular building blocks acts as a gel, not liquid as previously believed

University of Alberta researchers have found an answer to a fundamental question in genomic biology that has eluded scientists since the discovery of DNA: Within the nucleus of our cells, is the complex package of DNA and proteins called chromatin a solid or a liquid?

In a study published in the journal Cell, the research team, led by Professor Michael Hendzel of the Faculty of Medicine & Dentistry and collaborator Jeffrey Hansen from Colorado State University, found that chromatin is neither a solid nor a liquid, but something more like a gel.

Previously, fields such as biochemistry operated under the assumption that chromatin and other elements of the nucleus operated in a liquid state, Hendzel said. This new understanding of the physical properties of chromatin challenges that idea, and could lead to a more accurate understanding of how the genome is encoded and decoded.

“We all know the difference between water and ice, and we all understand that if you want to tie two things together, for example, you can’t do it with a liquid. You need a rope, something that has mechanical strength,” said Hendzel, who is also a member of the Cancer Research Institute of Northern Alberta (CRINA). “That’s what we’re talking about here. Right now, all of our understanding of gene regulation is largely based on the assumption of freely moving proteins that find DNA and whose accessibility is only regulated by the blocking of that movement. So this research could potentially lead to very different kinds of ways of understanding gene expression.”

“Another way to look at it is that bone, muscle and connective tissue all have very different physical properties, and if those physical properties break down somehow, it’s almost always associated with disease,” said Alan Underhill, associate professor in the Department of Oncology, CRINA member and contributor to the study. “In the case of chromatin, it’s about scaling this principle down to the level of the cell nucleus, because it is all connected.”

“What we’re seeing here bridges the biochemistry of cellular contents and the underlying physics, allowing us to get at the organizational principles—not just for cells, but the entire body,” he added.

All of our chromosomes are made from chromatin, which is half histone (or structural) proteins and half DNA, organized into long strings with bead-like structures (nucleosomes) on them. Inside the nucleus of a cell, the chromatin fibre interacts with itself to condense into a chromosome. The chromatin fibre also supports gene expression and replication of chromosomal DNA. Although there is some understanding of the structures that make up a nucleus, how those structures are organized and the full extent of how the structures interact with each other is not well known.

The team’s findings bridge research done over the past 50 years on chromatin gels produced in the laboratory to demonstrate its existence in living cells, which has major implications for interpreting their elastic and mechanical properties, Hendzel explained.

For example, recent studies have shown that the deformability of chromatin in cancer cells is an important determinant of their ability to squeeze through small spaces to travel outside a tumour and metastasize elsewhere in the body—something that is much easier to explain if chromatin is gel-like rather than a liquid. Cancer cells do that by chemically changing the histone part of the chromatin to make it less sticky, Hendzel said.

Based on the new research, this can now be explained as a process that reduces the strength of the gel, making it more deformable and enabling cancer cells to spread through the body. Defining how this gel state is regulated could lead to new approaches to prevent metastasis by finding drugs that maintain the chromatin gel in a more rigid state.

“The texture and appearance of chromatin is something pathologists have used to do clinical assessment on tumour samples from patients,” he said. “It’s really looking at how the chromatin is organized within the nucleus that allows them to make insight into that clinical diagnosis. So now that’s a process that we can reframe in a new context of the material state of the chromatin.”

Hendzel said he is confident the discovery of the gel-like state of chromatin will provide a guiding principle for future research seeking to understand how the material properties of chromatin shape the function of the nucleus to ensure the health of cells and the organisms they make up.

“One of the most significant things to me is that this research highlights how limited our knowledge is in this area,” he said. “Currently, we are focused on testing the widely held belief that the physical size of molecules determines their ability to access the DNA. Our ongoing experiments suggest that this too may be incorrect, and we are quite excited about learning new mechanisms that control access to DNA based on the properties of the chromatin gel and the liquid microenvironments that assemble around it.”

“I think it forces us to go back and look at what’s in textbooks and reinterpret a lot of that information in the context of whether ‘this is a liquid,’ or ‘this is a gel’ in terms of how the process actually takes place,” added Underhill. “That will have a lot of impact on how we actually think about things moving forward and how we design experiments and interpret them.”

The research was supported by grants from the National Science Foundation, the Canadian Institutes of Health Research and the Cancer Research Society.