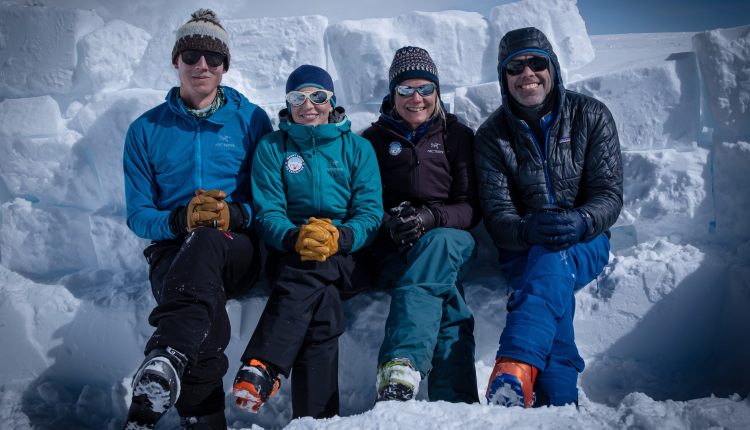 A pair of University of Alberta researchers led a research expedition that braved nearly three weeks of unrelenting cold and wind during the first phase of a monumental multi-pronged research effort to document changes atop the world’s largest mountain.

Alison Criscitiello, director of the U of A’s Canadian Ice Core Lab and researcher in the Faculty of Science, and Zac Robinson, an alpine historian in the Faculty of Kinesiology, Sport and Recreation, spent 19 days on Mt. Logan—Canada’s 5,959-metre behemoth located in Kluane National Park and Reserve in the southwestern corner of the Yukon—in plunging temperatures that never rose above -20 C and wind that rarely dipped below gale force.

The pair, along with Rebecca Haspel, a geoscientist out of Calgary, and Toby Harper-Merrett, a vice-president with the Alpine Club of Canada, made the epic journey to complete projects all looking to capture the history of change on the mountain.

The first piece, led by Criscitiello, involved setting the stage for a return trip next year when she and her team will drill an ice core measuring some 200 metres long.

“We hope to find Pleistocene ice,” said Criscitiello. “If we hit the right ice-coring location, which has the oldest ice that we think is sitting up there, it will be on the order of 30,000 years old.”

In search of ancient ice
Because the top of Mt. Logan never gets above 0 C, Criscitiello said she expects to pull a well-preserved paleoclimate record out of the summit plateau—potentially the oldest Arctic glacier ice outside of the polar regions.

“Because the summit plateau never gets above freezing, and because the region experiences high annual snowfall and moisture due to its proximity to the North Pacific, Mt. Logan is the perfect place for this research,” she said.

Before next year’s drilling, the team needed to gather as much data as they could, which included installing North America’s highest weather station and completing a radar survey to allow them to select the ideal ice-coring location.

“In this case, because the summit plateau is so big, and because we have radar technology available to us now that wasn’t available before, we have confidence we will hit the ideal spot,” she said. “We had a lot of ground to cover, so we did a pretty large radar survey.”

As for the weather station, Criscitiello said these data will be vital in assessing the role of local weather conditions in controlling chemical variations within the deposited snow, and to understand the seasonality of weather on the summit.

“Further, given the extreme location, altitude and difficulty of access to this region high on Mt. Logan, this weather station will provide an invaluable look into how high alpine regions of the Northwest Pacific are responding to modern climate change, allowing us to place these recent changes within the context of natural climate variability since the last glacial period.”

Though it trails Alaska’s Denali (6,190 metres) for the title of tallest mountain in North America, Mt. Logan has an unrivalled girth with a base circumference of more than 160 kilometres. This allows for an inhospitable but navigable 20-kilometre-long glaciated plateau that is host to 12 peaks floating above the clouds at 5,000 metres above sea level.

“It’s like being tiny ants in this big world of ice and rock,” said Robinson. “The size of it all makes it deceiving, especially coming from the Rockies, to gauge distances. The scale is just so much larger in Yukon’s Icefield Ranges.”

How to summit safely
Robinson said that to be able to safely work in that environment, the team first needed to acclimatize to altitude, which meant skiing up from the bottom while employing mountaineering expedition acclimation techniques—climbing high and sleeping low, then taking rest days.

Despite the cold, Criscitiello said late winter/early spring is the best time to climb the mountain because of the long hours of daylight, and the relative safety that comes from crevasses still filled in with snow and stability of ice bridges.

All told, after waiting through a two-week COVID-19 quarantine in Whitehorse and then flying in to base camp on May 5, the non-technical ascent took 10 days for the group to safely get from the bottom of the mountain to where their scientific equipment was waiting for them on the summit plateau.

“There are avalanche and crevasse hazards that require managing, but the real trick about trips to the big Arctic mountains is dealing with the temperatures,” said Robinson. “There were some days where we had 100-kilometre-per-hour winds where we didn’t get out of our tents.”

For that reason, he said just keeping safe and healthy requires constant labour.

“When you pull into a camp, it’s not just pitching your tent; we have to dig in the snow with saws and shovels to build snow walls, like an igloo, to protect the tents from winds.”

Mt. Logan hadn’t been officially measured since 1992, when climbers with the Geological Survey of Canada led an expedition to the colossus using GPS technology still in its infancy.

“We were lucky to have been able to run two high-end GNSS receivers on the summit for 30 minutes, long enough to get a very precise elevation measurement,” said Robinson of the data he collected, now being analyzed by federal scientists at Natural Resources Canada.

The team also had access to images from Mount Logan’s first ascent in 1925, accomplished by members from the alpine clubs of Canada and the U.S., as well as from the mountain’s second ascent in 1950, that he hoped to recreate.

Robinson said the group was keen to line up and reshoot the older images—a comparison of which could show changes over a century—but it turned out to be trickier than anticipated.

“On a high-altitude mountaineering expedition in this type of a complex glaciated terrain, where you’re roped up to one another, carrying a heavy pack and dragging a sled-load of gear, you don’t have the luxury to say, ‘Hmm, I think we need to move 20 metres this way,’” said Robinson.

“On those really cold days, I decided I would just shoot as much landscape imagery as possible and then at the end we’ll do a bunch of layovers and see what we got.”

At first glance, Robinson, who had previously skied up Mt. Logan in 2003, said that notwithstanding what was an abnormally low snow year, the upper plateau and main summit complex hasn’t changed that much in the intervening years.

Where the change was glaring, however, was lower on the mountain. Criscitiello, who skied up Mt. Logan in 2018, noted at base camp at about 3,000 metres, ski planes were having trouble taking off because of the warming snowpack earlier in the season than in years past.

“This is partly why we’re doing this over two years and it would be too much to do in one—because the window for safe climbing as well as safe flying into and out of base camp is narrowing, and is now a couple of weeks earlier,” she said. “When we left base camp this year, it was already really warming up.

“That change is real.”

As Criscitiello starts planning for next year, she said it’s hard not to think about what they accomplished this year.

“People come from all over the world to try to climb Logan, but to climb it and not have that be the end goal takes the right team,” she said of the 19 days on the mountain. “We stayed at altitude to complete our objectives high on the mountain, and our success came from having the right mix of backgrounds and strengths and skills. I feel very lucky that it was the perfect team for the job.”

When drilled, the cores will be stored in the Canadian Ice Core Lab, a facility that is currently home to more than 10,000 years’ worth of evidence of changes to our climate held in 1.4 kilometres of ice core samples.