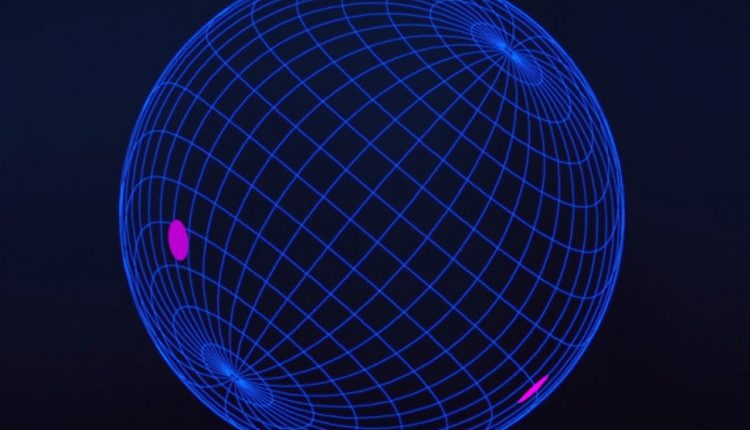 The matter inside neutron stars is less compressible than previously thought. A global collaboration, led by (among others) Anna Watts of the University of Amsterdam, has come to this conclusion after using NASA’s Neutron star Interior Composition Explorer (NICER) to determine the size and mass of the most massive neutron star known: PSR J0740+6620. NICER is an X-ray telescope aboard the International Space Station. The results have been accepted for publication in Astrophysical Journal Letters.

At the end of their lives, the fuel in the cores of massive stars runs out and they collapse under their own weight before exploding as a supernova. The most massive stars remain as black holes, the others become neutron stars. Neutron stars are extreme objects: they have more mass than the sun at a diameter of only several tens of kilometres. But what form does the matter take in the inner core, where the density is extremely high?

The investigated pulsar PSR J0740+6620 (J0740 for short) is located more than 3,000 lightyears away toward the constellation Giraffe. It is a binary star system with a white dwarf, the cooling remnant of a Sun-like star, and it rotates 346 times per second on its own axis. Its mass is estimated to be 2.1 times the mass of our Sun.

Neutrons or quarks?
In traditional models of a typical neutron star, a star about 1.4 times the mass of the Sun, physicists expect the inner core to be mostly filled with neutrons. The lower density keeps the neutrons far enough apart to remain intact, and this inner stiffness results in a larger star.

In more massive neutron stars like J0740, the inner core density is much higher, pushing the neutrons closer together. It’s unclear whether neutrons can remain intact under these conditions or if they disintegrate into quarks instead. Theorists suspect that the pressure is causing them to shatter, but many questions remain about the details. To get answers, scientists need an accurate measurement of the size of a massive neutron star.

Pulsars
To measure their precise dimensions, NICER observes rapidly rotating neutron stars: pulsars, discovered in 1967 by Jocelyn Bell Burnell. Pulsars have hot spots on their surface that emit bright X-rays. As the pulsar rotates, these spots spin in and out of view, like lighthouse beams, producing regular variations in X-ray brightness.

But pulsars are also so dense that their gravity curves the nearby space-time, like a bowling ball resting on a trampoline. The same mass in a smaller package causes greater deformation. That distortion is so strong that light from the far side of the star can be redirected, making the pulsar appear larger than it actually is. This effect can be so intense that it prevents the hot spots from completely disappearing as they orbit the pulsar. NICER uses these effects to accurately measure the star’s mass and diameter.

Different approaches
Two teams have used different approaches to determine the size of J0740: a group led by Anna Watts and Thomas Riley (respectively professor and postdoc of astrophysics at the University of Amsterdam’s Anton Pannekoek Institute) and a team led by Cole Miller, professor of astronomy at the University of Maryland, College Park (USA). In addition to the NICER data for J0740, both groups also made X-ray observations with ESA’s XMM Newton satellite, which were helpful in correcting for background noise. The two teams estimate that the pulsar is about 25-27 km in diameter.

Heavier but same size
“Our new measurements of J0740 show that, although it is nearly 50% heavier than J0030, it is essentially the same size,” Watts says. “That rules out some models for neutron star nuclei, including those where the interior is just a sea of ​​quarks. J0740’s size and mass are also a problem for some models where the nucleus contains only neutrons and protons.” Amsterdam PhD student Geert Raaijmakers is now looking at the consequences for dense matter, combining the new NICER results with data from gravitational wave detectors and laboratory data.

Recent theoretical models propose some alternatives, such as inner nuclei containing a mix of neutrons, protons and exotic matter from quarks or new ones. “But all possibilities will have to be re-evaluated in the context of this new information from NICER,” according to Watts.