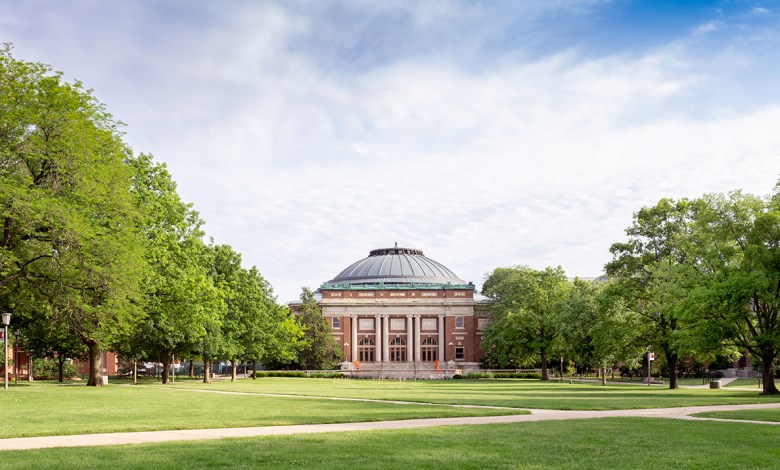 University of Illinois: New Carle Illinois Sculpture Has Dual Meaning Reflecting The Mission Of The College

A powerful sculpture now stands before the new home of Carle Illinois College of Medicine. The figure resembles the anatomy of a hand and the work of physicians. A closer look at the sculpture in front of the Medical Sciences Building reveals a dual meaning that echoes the foundation and mission of the college.

The structure resembles much more than the anatomy of a hand and reflection of what aspiring physicians might do when they walk into the building. The cast bronze portion is immediately recognizable as solid figurative hand. However, the bones show the negative space within the stainless plate.

It shows the familiar, but also an X-ray view of an interior where a problem in need of a solution might live- much like the problems and “empty spaces” inside the medical field that Carle Illinois is determined to solve as the world’s first engineering-based college of medicine.

A former professor of sculpture, Metz responded to a “call for submissions” for already existing sculptures. Metz was hesitant because he believes the best public work is designed specifically for the site. “That said, ‘Structural Mechanics’ already existed, and I thought it visually fit the site and conceptually fit the functions of the building,” Metz explained.

The sculpture was originally commissioned for the corporate headquarters of a large sports medicine facility in Birmingham, Alabama. The sculpture was titled “Diagnostic Image.” Over time, the company dismantled, and assets sold off. Metz was fortunate to buy back the sculpture before it was scrapped.

For years, it was kept in Metz’s studio until he saw the “call for submissions” from Carle Illinois, the statue was renamed “Structural Mechanics,” and found its new home.

“I recently retired after 42 years as professor of sculpture at the Univ. of Montevallo, a small liberal arts school in Alabama. After spending all my professional life on a campus, it gives me great pride to see one of my pieces on yours,” Metz said.

The statue will now stand as a symbol to physician innovators for years to come that beneath the surface lies opportunities to dive into empty spaces, find solutions, and innovate.