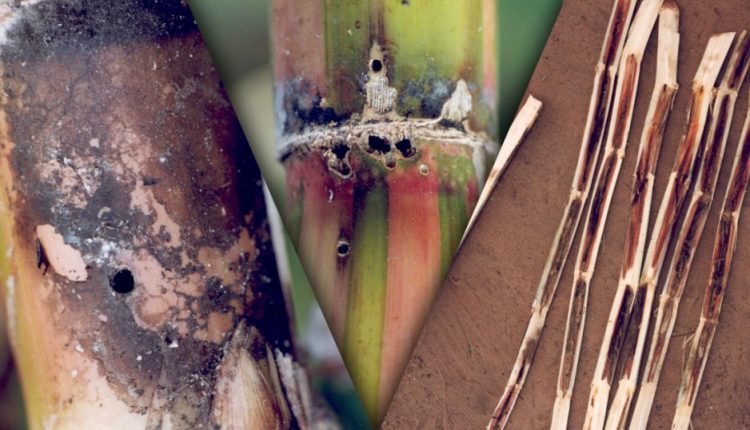 University of São Paulo: The conductor of an orchestra: red-rot fungus controls insect and plant to spread

Infestations by pests and fungi in the sugarcane crop are one of the biggest problems faced by the sugar-alcohol industry and often occur together. Red rot, caused by the fungus Fusarium verticillioides, and the sugarcane borer, for example, are almost always in association. It was believed that the borer opened the way for the fungus to contaminate the sugarcane, but researchers at USP’s Luiz Queiroz School of Agriculture (Esalq) in Piracicaba, in an innovative discovery, point out that the relationship between the two is much closer than that it seems and the fungus is the master of this whole scheme.

Until then, it was understood that the fungus F. verticillioides was opportunistic, that is, it took advantage of holes made by the insect Diatraea saccharalis (sugarcane borer) in the cane stalks to infest the plant. However, the work Fungal phytopathogen modulates plant and insect responses to promote its dissemination , published in The ISME Journal, a journal of the International Society for Microbial Ecology published by the group Nature, revealed that this is not quite the truth. The result of seven years of research by the teams of professors Marcio de Castro Silva Filho, from the Laboratory ofMolecular Biology of Plants, and José Maurício Simões Bento, from the Laboratory of Chemical Ecology and Insect Behavior, both from Esalq, the study points out that the fungus F. verticillioides manipulates the borer and the plant in order to spread on the largest possible scale.

Relationship of the fungus with the sugarcane borer

All plants have natural defenses that resist different types of infestations and the fungus F. verticillioides cannot, by itself, infest sugarcane. He needs a facilitator to be able to contaminate it, since the healthy plant has in hand structural and biochemical mechanisms to resist the penetration of the fungus. In an environment where it is present, for example, but there is no borer, contamination of the sugarcane by the fungus is difficult.

Unlike other fungi, F. verticillioides has the advantage of an intimate interaction with the sugarcane borer, which allows its dispersion in a potentiated way. It produces volatile compounds that strongly attract D. saccharalis and when consumed, it infects the caterpillar and becomes part of its life cycle, remaining until the next generation, even in the absence of the fungus.

“As soon as the borer becomes an adult, like a moth, the fungus is transmitted to its descendants, who continue the cycle by inoculating the fungus into healthy plants”

This phenomenon is known as vertical transfer, a rare event in the biological realm and the first recorded case of a fungus-insect interaction. Professor Marcio de Castro Silva Filho, from the Genetics Department at Esalq and one of those responsible for this discovery, explains that “as soon as the borer becomes an adult, like a moth, the fungus is transmitted to its descendants, who continue the cycle by inoculating the fungus on healthy plants”.

In this way, the caterpillar becomes not a facilitator for the penetration of the fungus in the plant, as previously thought, but its own vector. One of the experiments in the study showed, for example, that when placing F. verticillioides and the caterpillar next to the sugarcane, its distribution throughout the plant is ten times greater than if the fungus were only using a mechanical perforation in the sugarcane.

The caterpillar, despite not having any direct benefit from this interaction, is also not harmed by its association with the fungus. The F. verticillioides remains in the drill throughout their life cycle without interfering, but he, in turn, is immensely benefited from this relationship.

When infecting the plant, the fungus causes the cane stalk rot because it is a necrotrophic pathogen, that is, it destroys plant tissues through the release of toxins. The infestation causes a reduction in the sugar content and contamination of the sugarcane juice, which affects the quality and yield of the product. According to data from the Sugarcane Technology Center (CTC), the contamination of sugarcane fields by the association of the fungus with the insect causes annual losses in the range of R$ 5 billion, that is, around 400 thousand tons of sugarcane are not crushed per year.

In addition, the fungus alters the composition of the volatile compounds naturally produced by the plant to make it produce specific volatiles that attract healthy adult female borers. These, in turn, will ovipose uncontaminated plants in order to enhance the fungus’ dispersion. Professor at the Department of Entomology and Acarology at Esalq and also coordinator of the research, José Maurício Simões Bento, says that these volatiles “reduce the parasitism efficiency of the natural enemy of the sugarcane borer, the wasp Cotesia flavipes , making it difficult to biological control, because because the plant changes the composition of volatiles, the wasp has more difficulty in finding the caterpillar in the plantations”.

The way in which the fungus, aided by the borer, spreads in sugarcane fields reinforces the need for increased attention to biological control from the lowest infestations of the disease, in order to reduce as much as possible the population of the sugarcane borer, D. saccharalis, since it is the vector of the disease. For this, explains Professor Simões, “pest infestations should be kept, whenever possible, in low infestations, both by means of the larval parasitoid ( Cotesia flavipes ) and by the egg parasitoid ( Trichogramma galloi )”.

The fungus created a practically perfect strategy for its dissemination, in which it controls the insect in the caterpillar and adult (moth) stages, in addition to manipulating the plant, which makes it, in the words of Professor Castro Silva, the “great conductor of an orchestra”.

iednewsdesk Jan 19, 2022
The human body has carefully controlled intricate systems in place that work in tandem to keep it healthy and…

Yonsei University: New Study Yields the Inside “Dope” on…