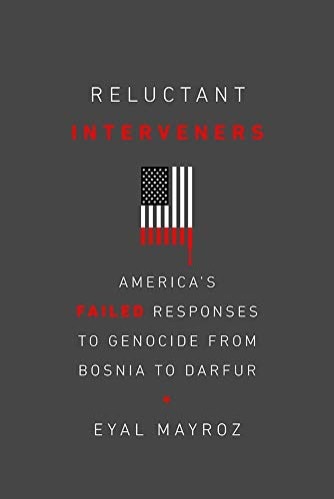 The American Library Association has selected a book on why the US has failed to intervene in genocide as one of its top academic titles for 2020.
Reluctant Interveners: America’s Failed Responses to Genocide from Bosnia to Darfur
The official publication of the American Library Association, Choice, has included a University of Sydney academic’s book on its annual list of Outstanding Academic Titles.

‘Reluctant Interveners: America’s Failed Responses to Genocide from Bosnia to Darfur’ by Dr Eyal Mayroz focuses on the complex relationships between the citizenry, the media, the political elites, and institutions in the United States of America. It is published by Rutgers University Press.

The titles on the list have been selected mostly for their “overall excellence in presentation and scholarship, importance relative to other literature in the field, distinction as a first treatment of a given subject and their originality or uniqueness of treatment”, a Choice representative said.

Books on the list constitute about four percent of the more than 11,600 titles submitted to the magazine over the past year.

University of Warwick: New book centres the contribution of…

Dr Mayroz’s motivation to write the book came out of exasperation. “I wanted to know why the international community, led by the US, sat on its hands while countless children, women, and men were massacred, often by their own governments,” he said.

The book offers a sobering account of the interactions between the governing and the governed, and the dynamics which transformed moral concerns for the lives of faraway “others” into cold political calculations. For example, in 2004, the Bush administration labelled what was happening in the Darfur region of Sudan as ‘genocide’. However, despite Americans’ support for strong action on genocide, the US still failed to act meaningfully, due largely to its inability to convince fellow UN Security Council permanent members Russia and China to act against their immediate economic interests in that country.

In a time of ubiquitous social media and populist revival, Dr Mayroz argues that a greater role for US citizenry in decision-making on responses to genocide may be on the cards.

Dr Mayroz lectures in the Department of Peace and Conflict Studies at the University of Sydney and is a member of the Genocide Prevention Advisory Network, an international group of experts who advise governments on the causes, consequences, and prevention of genocide, and other mass atrocities.

University of Warwick: New book centres the contribution of British Black and Asian…

University of Warwick: Reducing patients’ breathing efforts could be key to success…

India Education Diary Bureau Admin Apr 25, 2022
Varanasi : With an aim to empower and facilitate students who are enrolled with BHU and face hardships in course of…

University of Warwick: New book centres the contribution of British…

University of Warwick: Reducing patients’ breathing efforts could be…

University of Amsterdam: Designing the perfect piece of chocolate