The University of Toronto has lowered its flags to half-mast in memory of Prince Philip, the Duke of Edinburgh and husband of Queen Elizabeth II.

Buckingham Palace said Prince Philip, 99, died Friday at Windsor Castle, where he lived with the Queen during the pandemic.

“The thoughts of all Canadians are with her and the entire Royal Family as they mourn this significant loss,” Prime Minister Justin Trudeau said on Twitter.

Flags across U of T’s three campuses will remain at half-mast now until sunset on the day of the funeral or memorial service.

Prince Philip visited Toronto 20 times over the years, stopping more than once at U of T. On their first royal visit to Toronto in 1951, the royal couple posed for pictures and waved to a crowd from the steps of Hart House. In May 1962, Prince Philip laid the cornerstone of Massey College, an independent graduate college affiliated with the university.

“It was a visible statement that Toronto took graduate studies seriously,” wrote historian Martin Friedland of the event. 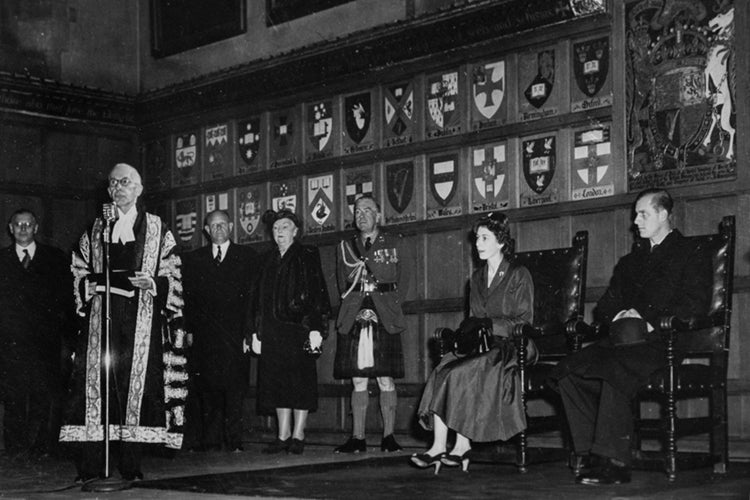 In 2002, the duke returned to Massey to celebrate its 40th anniversary with about 300 people in attendance. According to the National Post, he said in his morning remarks that he felt right at home at Massey because he was chancellor of Cambridge University. University Professor Emerita Ursula Franklin, who was a distinguished physicist and metallurgist who taught at U of T for over 40 years, and John Polanyi, a Nobel laureate in chemistry and University Professor, draped a Massey gown over Prince Philip’s shoulders.

Novelist and U of T alumna Margaret Atwood, a fellow of the college, was quoted in the Toronto Star as saying the duke delivered a good speech. “It was funny. It was short. It had a shape and it was popular,” she said.

Massey was among the prince’s patronages with a Toronto connection, along with the Canadian Club of Toronto, Upper Canada College, the Toronto Club, Royal Canadian Yacht Club, Toronto Press Club and Loyal Canadian Prince Club.

“Prince Philip had a lengthy history of public service to the Commonwealth, particularly Canada,” said Toronto mayor and U of T alumnus John Tory. “Whether it was speaking at the Toronto Board of Trade in 1951 or surprising all with a visit to Toronto in 2013 at age 91 to present a ceremonial flag to the Royal Canadian Regiment’s 3rd Battalion, Prince Philip had a strong connection to our city.”

Buckingham Palace has created an online condolence book. The Canadian government, meanwhile, has set up a page to commemorate Prince Philip that also allows Canadians to share their messages of sympathy.