‘Unless women are raped or killed, they are not newsworthy’: Day 2 of The Media Rumble speaks uncomfortable truths

· Sessions covered a wide range of topics including gender, climate change, criticism within the media, the question of identity in fiction and film screenings of Free Meek, The Clinton Affair and City of Ghosts

New Delhi: Engrossing debates, panel discussions and conversations at one of South Asia’s premier journalism forums, The Media Rumble, brought to the limelight, the immense number of challenges faced in journalism, the alarming statistics of gender and caste representation in news media, the long road still ahead and the critical need for a strong and accountable media. Conceived by the independent news portal and media critique website Newslaundry, and produced by pioneering entertainment and arts company Teamwork Arts, the third edition of the forum featured some of the most experienced news professionals, journalists, tech innovators, investors and policy-makers from across India and the world.

The first session on Day 2 of The Media Rumble, Gender in Cinema, featured critically-acclaimed actor Swara Bhaskar, in conversation with Abhinandan Sekhri, co-founder and CEO of Newslaundry. Swara spoke about how widespread the presence of women in Bollywood is now as compared to the past and the reason she continues to stay opinionated on social media despite the vicious trolling meted out to her. Commenting on the institutionalised condoning of such abuse, she said, “As a society we are inured to gender violence and our films continue to show casual violence as love. We show domestic violence on screen and have dialogues like ‘maarte hai par pyar bhi karte hai’. This mindset needs to change.” Swara closed the discussion by saying that the one thing that Bollywood understands is numbers. A film genre that does well will continue to lure producers. As the session wrapped up, Ravish Kumar, the just-announced winner of this year’s Ramon Magsaysay award walked in amidst thunderous applause and a standing ovation. Swara was invited to ask him a few questions. She raised the question of legitimate news channels broadcasting fake news to create hysteria. Ravish responded categorically that this will not change till the current political atmosphere changes. He said that the government is using television as an extension of its political agenda. Closing the session with a statement of hope, Ravish said that if the media continues to speak the truth and communicates to its audience with compassion, there is the possibility that people will change. “My first congratulatory note on WhatsApp was from my first troll of several years back! If that’s possible, then anything is.” 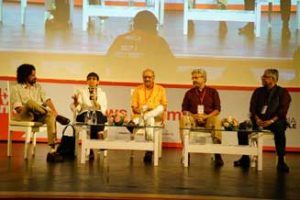 Moderated by Amit Varma, Mumbai-based author and columnist, a panel comprising Paromita Vohra, Supriya Nair, Vivian Schiller and Padmapriya Janakiraman discussed India’s #MeToo movement, the media’s coverage of it and whether it really impacted the culture of misogyny in workplaces. ‘The media covered #MeToo reactively,’ said filmmaker and writer Paromita Vohra. Supriya Nair, writer and editor and weekly columnist for the Mumbai Mirror, thought that the media had been “lazy” in their coverage, simply “reporting the accusations” but not exploring the “deeper issues”. The reason, Nair believed, was because media houses did not think this would “get ratings past the first sensationalist headline”. Vohra did not believe that this was surprising and lamented a media that was and has always been “empathetic and sympathetic to men”. Janakiraman mentioned how, after a traumatic rape of one of her actress colleagues by an established name in the industry, she, along with some other women, had formed ‘The Women’s Collective’ to look out for one another within the Kerala film community and had even called on the Chief Minister of the state with a representation of issues. She credited the South Indian press for having garnered much more coverage of the rape and of women’s issues in general than its North Indian counterpart. Vivian Schiller stated that, for media agencies in the US, there was a “hunger to find holes” in #MeToo accusations, even though “less than 5% of accusations are proved to be false”, noting that despite a large positive “movement towards greater representation and justice”, there was simultaneously a move towards more regressive values, especially in the US. Vohra summed up the media’s portrayal of women’s issues aptly, saying, “Unless women are raped or killed, they are not newsworthy.”

In Climate Change in Indian Media: Hot but not Bothered, anchor of ‘We the People’, one of NDTV’s flagship primetime shows, Sarah Jacob started off the session with the question of rising to the expectations and challenges around the environment in India, especially as we find ourselves sitting on a timebomb and swaying between health or climate in domestic journalism. Aruna Chandrashekar, Bangalore-based environmental journalist and researcher, presented the example of the Operation Green Hunt to emphasise that environmental movements have been on forever in India and conflicts had been reported on land acquisition or water shortage during the UPA 2 government and even before that. “But we don’t have dedicated people covering the subject of environment in India, and as a result, it is often left on the shoulders of freelancers.” Supreme Court Advocate Sanjay Upadhyay spoke from the perspective of environmental law and pointed out that judges or lawyers in India don’t understand the subject at all, making it difficult for good litigation to make news headlines. He further added that the legal fraternity hasn’t debated the issues very strongly yet, and judicial and legal bodies have largely been indifferent. Nitin Sethi, senior associate editor at Business Standard, concluded the session by reminding the audience that in recent times, some of the most commendable work on the environment has come out of the global south.

In The Curse of Being a Girl, author and award-winning war reporter, who has spent long years of reportage in Africa and the Arab world, Dominique Sigaud was in conversation with anchor and journalist Faye D’Souza. Dominique spoke powerfully and heart-wrenchingly about her new book, The Curse of Being a Girl, which is a first-ever in-depth and global study of violence against girls under the age of 18. Dominique talked about the continuing silence around violence against girls, whether in India or worldwide. She conveyed to the shocked and startled audience an undeniable truth: if, instead of girls, young boys were being sodomised night after night, there would have been sharp and shattering noise. She stressed on the need to share these stories, when the narrative of a girl is destroyed over and over again even before she is born, when young boys are brought up in patriarchal families with male dominion as the only accepted idiom, making them treat “girls as nothing” from the time they learn to think, when girls just born are mutilated in a tradition of violence, when even soldiers of the UN in shelter camps turn rapists and when rapes happen repeatedly without repercussion or opposition.

In Calling Out Our Own, moderated by Abhinandan Sekhri, the CEO of Newslaundry, Sevanti Ninan, founder of the media watch website Thehoot.org; Shekhar Gupta, founder and Editor-in-Chief of The Print; Siddharth Vardarajan, Founding Editor of The Wire; and R. Jagannathan, Editorial Director of Swarajya magazine looked at whether criticism within the media and media houses’ criticism of each other were healthy and a tool for self-improvement or an exercise in discrediting news. R. Jagannathan felt there had always been an ideological consensus between media houses and therefore there was no need to criticise each other. Sevanti Ninan added that one becomes “unpopular very fast” when you call out fellow journalists. Shekhar Gupta stated that “criticising the media is not the same as covering the media” and asked all journalists to allow colleagues the journalistic courtesy to respond to allegations. Siddharth Vardarajan asked why no stories were done on the surprise exits of senior journalists from big media houses or on the growing financial assets of certain politicians. The panelists agreed that the nexus between big business, governments and media houses made criticising each other difficult and that only a small percent of media was truly independent and therefore above reproach.

The last day of The Media Rumble also featured masterclasses. #TwitterForNews conducted by a team from Twitter India, on best practices for journalists, and optimising and leveraging content on Twitter, was well-received by attendees.

University of Glasgow: New Study to Understand the Relationship Between ADHD and…