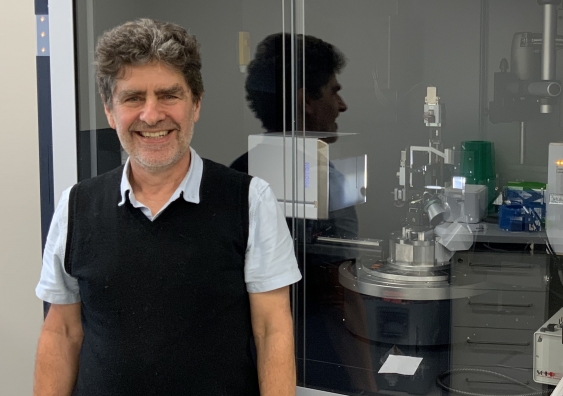 UNSW Sydney Professor Paul Curmi, from the School of Physics, with research partners at the University of Bayreuth in Germany and Lund University in Sweden, have been awarded a $16 million ERC Synergy grant for a project that aims to build artificial molecular engines using biological materials.

Prof. Curmi is the first Australian researcher working in Australia to receive an ERC Synergy grant, which opened to non-Europeans last year.

The research group is one of 34 to receive a share of $570 million in funding provided by the ERC to address research problems spanning multiple scientific disciplines.

“Inside every cell there are protein engines that transport molecular objects to their destination. We aim to investigate how motor proteins work by building one from scratch,” Prof. Curmi said.

“Motor proteins can convert chemical energy into movement more efficiently than man-made internal combustion engines. Despite numerous biochemical and biophysical studies, the details of these processes are still largely in the dark.

“If building an artificial molecular engine is achieved, in future years I can envisage the engine being used in biocomputers, as a building block in synthetic biology or even in molecular medicine,” Prof. Curmi said.

The 2016 Nobel Prize in Chemistry was won by scientists, including Nobel Laureate and UNSW Visiting Professor of Chemistry Sir Fraser Stoddart, who developed molecular machines and engines consisting of molecules that convert energy from light or fuel to movement. The inspiration for these engines came from cell biology where molecular motors are needed for vital processes.

Prof. Curmi’s newly funded project aims to build a biological molecular engine from scratch to better understand how it works. It will use what cells are made from proteins. A major advantage of biological engines is that they are highly energy efficient and convert chemical energy to motion directly, unlike internal combustion engines.

“The 2016 Nobel Laureates used synthetic molecules. Our project will use life’s protein molecules which are more difficult to work with but have greater potential to be scaled up and refined,” Prof. Curmi said.

“Our aim is to get clarity on how proteins generate movement directly from chemical fuel. We aim to master this process so that we can generate synthetic protein motors.”

The international project team will share the funding over six years. The team consists of Prof. Curmi from UNSW, Professor Heiner Linke from Lund University and Professor Birte Höcker from the University of Bayreuth.

The President of the ERC, Professor Jean-Pierre Bourguignon, said, “The ERC Scientific Council devised the Synergy Grants to offer a space where ambitious researchers could join forces to tackle multifaceted scientific challenges. Each of the new teams is aiming at nothing less than an important breakthrough. I am especially glad to see that so many European laureates look further afield to involve top scientists and scholars working in North and South America, Australia and Japan.”