A few short weeks before the scheduled date of the 2020 UNSW Blues and Sport Awards Dinner, the world shut down due to COVID-19 and plans had to be abandoned.

On Friday, after 54 consecutive days of no community transmission in NSW, the event was at last able to go ahead, with two years’ worth of achievements to celebrate.

Community sport was hit hard by the pandemic in 2020, with many competitions abandoned, shortened, or pushed back as the country struggled to contain the virus.

The awards presented were a tribute to the resilience shown by the UNSW sporting community, recognising that there was not a level playing field for sporting excellence during the unprecedented year.

The UNSW Hockey Club were presented with the 2020 Club of the Year Award due to the incredible determination and resilience shown during the season.

Throughout the challenges of sport and facilities being shut down, they kept their members engaged online and when the rebooted season began, they had retained all their teams and members throughout the levels of competition.

Female Student Athlete of the Year Matilda McDonell relocated to Queensland with her Giants teammates for the entirety of the Super Netball season.

McDonell not only made a big impact on the court and bolstered her reputation as one of the best young netballers in the country but continued to excel in her Law / Psychology degree while living in the team hub.

Dylan Martin was awarded the Male Student Athlete of the Year after his excellent form prompted the selectors to make a change to the Australian Kookaburras men’s hockey squad for the Tokyo Olympics.

The interrupted year forced many changes for Martin, who relocated between Perth and Sydney a number of times but was able to keep both his hockey and his studies in Building and Construction Management going to an extremely high level.

A highlight of the evening was the introduction of the new Alex Blackwell Award, which was designed to celebrate members of the community who uphold the values and vision of the UNSW Women in Sport and Active Recreation Strategy.

The award was named for former Australian cricket captain and UNSW alumna Alex Blackwell, recognising her contribution to women’s sport – both at UNSW and across Australia. 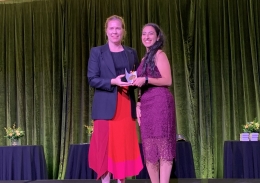 President of the UNSW Taekwondo Club Miriam Abd Elmesseh was announced as the inaugural winner of the prestigious award.

Abd Elmesseh has displayed outstanding commitment to the development of women’s participation and women’s leadership in sport.

She has consistently led the way in encouraging women’s involvement in any sport they wish to pursue through her involvement in the delivery of the SHE CAN program.

Blackwell has long been motivated by doing what is right, rather than what is easy, and it is this quality in particular that inspired the name of this new award and motivated the selection of the winner.

Blackwell is a vocal advocate for LGBTQI people, deciding to come out publicly in 2013 to allow her to fight more effectively to eliminate homophobia in sport.

She also played a key role in the launch of Cricket Australia’s trans and gender diverse inclusion policy in 2019.

In 2018 she became the first woman to be elected on to the board of Cricket NSW in the organisation’s 159-year history and in 2019 she was awarded an honorary doctorate by UNSW for her work in fighting for equality on and off the cricket pitch.

“Sport has been a massive part of my life and coming to university and being able to continue playing sport was so important,” said Blackwell during her presentation on Friday.

“I was picked for Australia at the end of my first year of Medicine at UNSW so the support I got from the University was a huge part of being able to have such a successful career representing my country.

“The Alex Blackwell Award is all about increasing opportunities for women and girls to play sport and get involved in active recreation.

“We know that sport was designed for men, by men back in the day and tonight’s a testament to the fact that things have changed.”