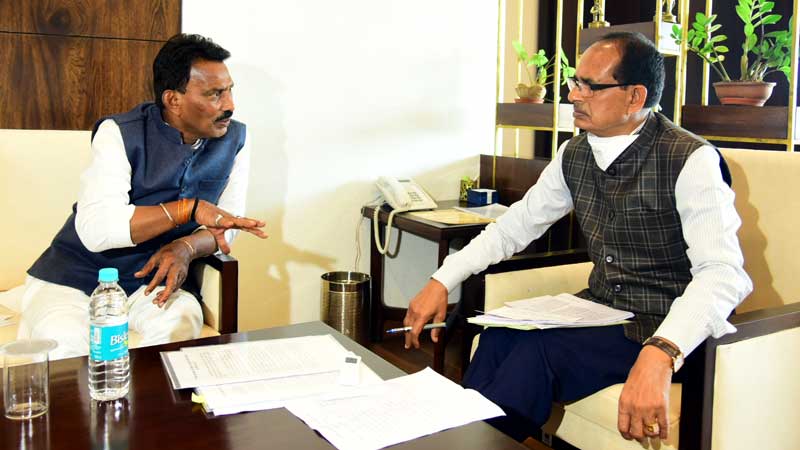 Bhopal : Chief Minister Shri Shivraj Singh Chouhan has said that the forthcoming budget of Madhya Pradesh will include revolutionary reforms. It will pave the way for creation of Atmanirbhar Madhya Pradesh. Chief Minister Shri Chouhan was holding discussion with the economists and subject experts about the upcoming budget of the state through video conferencing in Mantralaya today. He thanked everyone for the fruitful discussion.

In today’s discussion, valuable suggestions were received from economists and subject experts on medicine and health, agriculture, public finance and banking, rural development and economic activities, large and medium industries, micro, small and medium industries, school education, higher education and management, etc. These suggestions will be included in the upcoming budget of the state.

Oxygen plants should be set up in Madhya Pradesh

Director of AIIMS Bhopal Prof. Sarman Singh suggested that 3-4 new oxygen plants should be set up in the state. Pharma companies should be promoted and there should be more work in the field of nutrition. President of MP Nursing Home Association, Dr. Jitendra Jamdar said that efforts should be made to promote medical tourism in Madhya Pradesh. A Virology Institute should be established.

Well-known economist Shri Sumit Bose suggested that work should be done for social sector and infrastructure development in Madhya Pradesh through Public-Private Partnership (PPP mode). Efforts must be made for CSR Fund. Maximum support of NGOs should be taken for social works. There should be ‘flexibility’ in the budget so that all schemes are funded.

MD of Central Bank of India Shri Pallava Mahapatra suggested to make provision for agricultural infrastructure in the budget. He asked to promote labour sector in the state.

Increase fines and penalties one and half times

IIM Director Prof. Himanshu Rai suggested that ‘fines’ and ‘penalties’ should be multiplied one and a half times. Tax should be increased on foreign liquor and tobacco. Work should also be done on PPP mode in agriculture sector. Digital infrastructure should be made available in government schools.

Micro irrigation projects should be promoted

Chief General Manager of NABARD, Smt. T.S. Raji Gain suggested that micro irrigation projects should be promoted in Madhya Pradesh. For this, Madhya Pradesh should sign an MoU with the central government.

Poultry farming should be promoted

Shri H.K. Deka of NGO ‘Pradan’ suggested that there are wide possibilities of poultry farming in the state, so the sector must be encouraged. Special funds should be set up to help tribal and Dalit women.

Textile park should be developed in Madhya Pradesh

Chairman of Sagar Group, Shri Sudhir Agarwal said that Madhya Pradesh produces good quality cotton and in abundance. Textile Park should be developed in the state. A master plan of Bhopal should be prepared.

Priority must be given to vehicles of Madhya Pradesh

Efforts must to reduce cost of logistics

Director of Makson Group, Shri Rajendra Patel suggested to make efforts to reduce the logistics cost in the state. State General Secretary of Laghu Udyog Bharti, Shri Rajesh Mishra suggested construction of industrial buildings at the tehsil and district level, where small entrepreneurs can get rented space for setting up industries.

Large education groups must be invited in the state

President of CBSE Schools, Shri Anil Dhupar suggested that large education groups should be invited in the state. The state should become an education hub. Shri Vivek Shende of Vidya Bharati suggested that small schools run by social institutions should be given assistance for infrastructure development. He said that agriculture education should be encouraged for which agriculture faculty must be introduced.

Vice Chancellor of Rajiv Gandhi Proudyogiki Vishwavidyalaya Dr. Sunil Kumar suggested to announce the formation of State Education Commission in the state. Fee Regulatory Commission Chairman Dr. Ravindra Kanhere suggested that all schools should have the facility of study of agriculture and commerce. Academic infrastructure should be developed. Also, there should be smart classes in colleges.