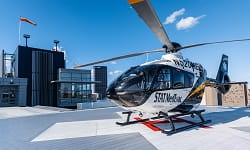 The new air ambulance helipad at UPMC Mercy will replace the original structure overlooking the Boulevard of the Allies, which has been in place since the mid 1980’s and a landmark of Pittsburgh’s cityscape. The relocation is part of the ongoing construction of the state-of-the art UPMC Vision and Rehabilitation Tower at UPMC Mercy.

“We have undergone tremendous progress at UPMC Mercy over the past decade, said John Innocenti, interim president, UPMC Mercy. “This new helipad is part of the evolution of our abilities to provide world-class health care to our patients.

“The rooftop location increases safety in our approach and departure access and the improved facilities provide room for the crews to decontaminate equipment and prepare for the next patient in need, said James Houser, president and chief executive officer, STAT MedEvac. “These features significantly enhance our ability to quickly get patients to the care they need at UPMC Mercy.”

In 2019, STAT MedEvac, operated by the Center for Emergency Medicine of western Pennsylvania, part of UPMC, transported 889 patients to UPMC Mercy, many with serious and often life-threatening injuries suffered from automobile accidents, gunshot wounds, falls and other events.