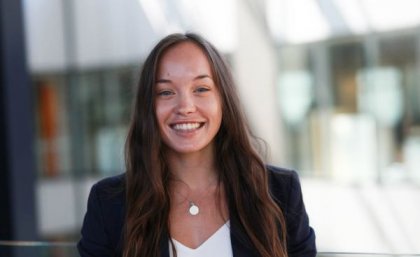 University of Queensland alumnus Tahlia Smith will be heading to Oxford after being named Queensland’s 2022 Rhodes Scholar.

Ms Smith, who graduated as Valedictorian from UQ in 2019 with a Bachelor of International Studies and a Diploma of Languages, currently works as a global engagement advisor at the Australian Trade and Investment Commission.

“As a public servant during the global pandemic, I understand the critical importance of effective public policy and strong international collaboration during times of uncertainty,” Ms Smith said.

Ms Smith plans to study a Master in Diplomatic Studies at Oxford University followed by a Master of Public Policy.

She also has experience working for the French Ministry of Education, the Ecuadorian Ministry of Foreign Affairs and the Australian Attorney-General’s Department.

“I’m particularly interested in the Diplomatic Studies course because I am looking forward to learning about international politics under the tutelage of course director Dr Yolanda Spies, a career diplomat and academic with expertise in conflict resolution and changing global power relations,” she said.

“I am interested in the Master of Public Policy as I am inspired by its impact on other Australian public servants who have used the multidisciplinary learning experience of this course to explore how behavioural insights can inform foreign policy.

“I aim to use the academic knowledge and professional skills gained through this course to address complex public policy challenges in Australia, particularly those caused by the global health crisis and regional political tensions.”

She received many university awards for academic excellence as well as several scholarships and grants to undertake domestic and international internships during her time at UQ.

Ms Smith is multi-lingual and uses her skills as a volunteer community translator and interpreter.

She is an active member of public service diversity networks where she strives to identify challenges faced by culturally diverse staff and designs strategies to combat these challenges.

She credits much of her success to the “life-changing” global experiences she was able to take advantage of at UQ.

She has also co-authored publications on topics including actioning the Sustainable Development Goals and cross-border collaboration to achieve the UN 2030 Agenda.

Ms Smith also runs marathons and is an avid cyclist and social sportsperson.

She performs salsa, bachata and other traditional South American dances at community events.

The Queensland Rhodes Scholarship are postgraduate awards which began in 1903 under the will of the late Cecil John Rhodes.

The qualities set out for those seeking Rhodes Scholarships include: academic and intellectual excellence, integrity of character, respect for fellow beings and a capacity for leadership.

More than 500 Australian Rhodes Scholars have been selected since the scheme began.

A Rhodes Scholarship covers all University and College fees, a personal stipend and return airfare.