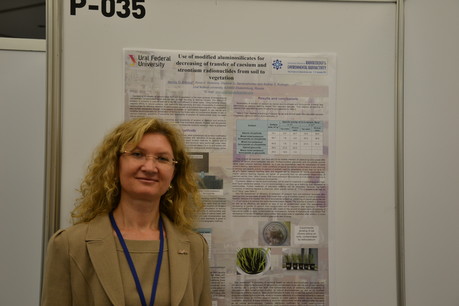 We continue the series of publications devoted to the 100th anniversary of Ural Federal University. This time we will tell you about the Ural School of Radiochemistry, the oldest in our country and the only one in the Urals, which is 70 years old. Department of radiochemistry at the Ural Polytechnic Institute (now Ural Federal University) was established in 1951, by organizer and first Dean of the Physics and Engineering Department, Evgeny Krylov.

The school was formed as a result of the outstanding scientist Sergei Voznesensky, a pioneer in domestic applied radiochemistry and radioecology. Under his leadership, the department staff began to study the problem of controlling the behavior of radioactive microcomponents in complex natural and technological systems, primarily occurring at all stages of the nuclear fuel cycle.

“The Ural Radiochemical School made a great contribution to the theory of interphase distribution of radionuclides, description of statics of radionuclide sorption, influence of the state forms of radionuclides in aqueous solutions on sorption patterns. After all, in order to obtain effective sorbents, it is necessary to understand how they extract radionuclides, what factors affect the performance of sorbents. This knowledge gives them an opportunity to synthesize sorbents specifically for radiochemical and radioecological tasks,” says Anna Voronina, who has headed the Department of Radiochemistry and Applied Ecology at UrFU since 2010.

Currently the Department of Radiochemistry and Applied Ecology at UrFU is working on research in three areas. These are directional synthesis of sorbents and technologies of their application for processing of liquid radioactive waste, treatment of radioactively contaminated natural waters and rehabilitation of radioactively contaminated territories. Second direction – radiochemical analysis and control of radionuclides in natural and technical objects. The third – technologies of obtaining radionuclides for scientific and medical purposes.

“In the 1970s, the Department of Radiochemistry began developing thin-layer inorganic sorbents (TIS) for express determination of radionuclides in fresh and sea water. In order to obtain TIS, sorbent substances are applied in thin layers to relatively inert (i.e. chemically inert) and inexpensive flat or porous carriers – cellulose, triacetate-cellulose, copolymer of styrene with divinylbenzene, polypropylene, etc. Such sorbents, due to a thin sorption layer, very quickly absorb and accumulate radionuclides, which is fundamentally important in radiochemical analysis of, for example, drinking water,” comments Anna Voronina.

The developed methods of radiochemical analysis with TIS were successfully used in radiological monitoring of the East-Urals Radioactive Trace (formed in connection with the accident at the chemical plant “Mayak” in the Chelyabinsk region in 1957), in the survey of natural waters of the Chernobyl accident area.

Filters with the use of TIS created at the Department of Radiochemistry of UrFU can purify drinking water from a whole “catalog” of radionuclides – cesium, strontium, cerium, ruthenium, uranium. One filter can purify up to 4 m3 of drinking water. The filters are intended for elimination of consequences of accidents at enterprises of chemical and radiochemical industry, nuclear power stations. The work was ordered by the “Environmental Fund of Sverdlovsk region” and supervised by the Ministry of Emergency Situations.

In addition, representatives of the Ural School of Radiochemistry have developed and patented a method of granulation of natural glauconite aluminosilicate. The method consists in using this natural mineral at water treatment stations to purify water from heavy metals and radionuclides and to eliminate water color and turbidity.

Another unique development of the Ural Radiochemical School is surface-modified inorganic sorbents.

“In contrast to TIS, in sorbents of this variety the carrier is sorption-active by itself. To increase the efficiency of these sorbents, we apply additional sorption-active phases to them. This approach makes it possible to increase the sorption characteristics of a carrier or expand the list of extractable radionuclides and obtain a sorbent of collective action. Surface-modified sorbents are used to concentrate radionuclides from natural and industrial solutions with high salt content. This refers to liquid radioactive waste from enterprises and radionuclide-contaminated natural water,” explains Anna Voronina.

The developed sorbents were tested at the Institute of Reactor Materials (State Corporation “Rosatom”) on purification of liquid radioactive waste from caesium, cobalt, strontium isotopes, alpha-emitting radionuclides in their combined presence.

One of the varieties of surface-modified inorganic sorbents uses natural aluminosilicates as carriers that are safe for the environment and therefore suitable for treatment of radioactively contaminated drinking water and soils. The principle of action of surface-modified sorbents is as follows: the sorption material is introduced into the soil, absorbs radionuclides and prevents their migration, transfer to plants. One kilogram of such sorbent is enough to decontaminate a one square meter area of soil (about 150 kg of soil). After cleaning, the soil becomes suitable for agricultural use.

“Sorbents for the removal of cesium and strontium radionuclides were tested in the Fukushima accident zone in Japan, the results were reflected in monographs published in Springer in 2015-2018. However, soil deactivation technologies may be in demand not only in areas contaminated as a result of radiation accidents, but also where soil contamination with natural radionuclides occurs due to large-scale use of fertilizers. Our Chinese partners have expressed their interest in rehabilitation of agricultural lands after the use of fertilizers containing radionuclides,” adds Anna Voronina.

A new area of application of sorption technology has opened up in connection with the tasks of selective extraction of chemically and radiochemically pure radionuclides from solution fuel of homogeneous nuclear reactors and solutions of irradiated targets, which are in demand in nuclear medicine. Employees of the Department of Radiochemistry and Applied Ecology at Ural Federal University created technologies for selective isolation of high-purity molybdenum-99 isotope using Thermoxide inorganic sorbents. The isotope quality has been confirmed by tests at the Kurchatov Institute National Research Center, in Belgian and American research laboratories, and Russian and American patents have been received.

Current projects of the Ural School of Radiochemistry are related to further improvement of sorption technologies of LRW processing, methods of radiochemical analysis, and theory of interfacial distribution of substances. In particular, methods of radiochemical analysis of natural waters are being developed: the method for determining the isotopic composition of uranium in its underground leaching solutions and the method for determining radium in natural waters are based on the use of TIS, other methods of radiochemical analysis of natural waters – on the use of Thermoxide sorbents, including those modified at the department. In the summer of 2021, methods for determining cesium-137 and strontium-90 will be tested to monitor groundwater in places of radioactive waste disposal. According to Anna Voronina, in the future the methods will be used to monitor the sanitary protection zones of nuclear fuel cycle enterprises and will be offered to the National Operator for Radioactive Waste Management (also part of Rosatom State Corporation).