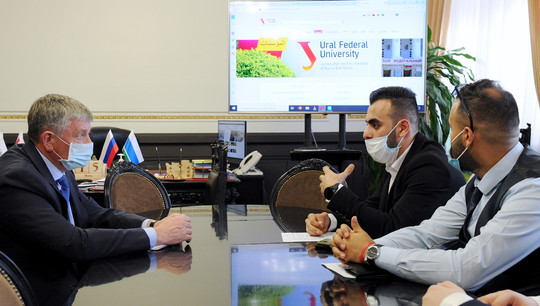 On the initiative and with the support of the leadership of the Ural Federal University, university students from Iraq, Jordan and Egypt prepared an Arabic version of the university’s official website. The page for applicants and students of UrFU from North Africa and the Middle East – one of the few among Russian universities – is available at urfu.ru/ar.

During a meeting with the Rector of UrFU Victor Koksharov, held the day before, a graduate student from Jordan Al-Tamimi Saher Muhammad Makhmud noted that while preparing texts for the site, he and his friends learned a lot about aspects of the life of the university and its capabilities.

“It was interesting for us to translate a website,” adds Zayed Omar Mehdat El-Sayed (Egypt), studying at the Institute of Radio Electronics and Information Technologies of the Ural Federal University. – We have been studying at UrFU for several years, but did not know many things. We are happy to help the university.”

According to the students, not all applicants and their parents from the countries of the Arab world are fluent in English and Russian, for them the new version of the portal will serve as an additional factor in choosing a place of study in favor of UrFU.

“Having a website in Arabic will play an important role in choosing a university for prospective students, because it shows a higher level of the university itself,” adds the Iraqi Mohammed Alghannami.

Rector noted that the new version contains only the most important information for future students: accommodation, educational programs, ways of submitting documents and scholarships. Rector Koksharov expects that with the new version, the number of students from Arabic-speaking countries will increase. He also recalled that North Africa and the Middle East are among the priority regions for the development of the university’s international activities.

216 students from Arabic-speaking countries study at UrFU, 116 of them – on a contract basis: more than 90% – in Russian language.