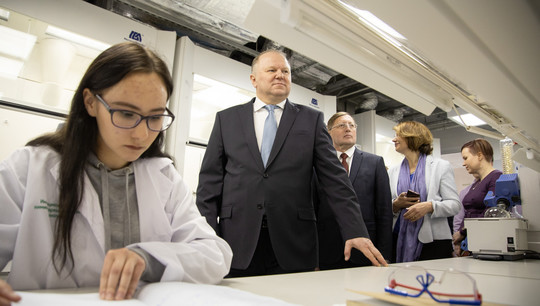 Ural Interregional Research and Education Center Is Developing Its Structure

The formation of the structure and governing bodies of the Ural Interregional Scientific and Educational Center (REC) “Advanced Production Technologies and Materials” continues. An important step in this direction is the agreement on the formation of the REC Supervisory Board, which was signed by the governors of the Sverdlovsk, Chelyabinsk and Kurgan regions.

Nikolai Tsukanov, Presidential Plenipotentiary Envoy to the Ural Federal District, headed the Supervisory Board of the Ural REC. Last year, he actively supported the idea of ​​creating a REC and applied for support to state corporations, whose enterprises are located in the Urals Federal District, and many of them responded.

“The activities of the REC participants contribute to the development of the Ural Federal District and can bring significant economic benefits in the coming 5-10 years,” notes Nikolai Tsukanov. – The enterprises of the regions will receive a resource for the modernization of production and increase competitiveness. We need to make every effort to fully implement the declared concept of the REC and make it one of the key drivers in the development of regions. Projects in the field of aerospace and aircraft building, new energy, ecology in industry, waste processing, urban development, which will be based on new production technologies and materials, have already been selected.”

University of Mannheim: Funding of millions for the…

University of Pretoria: Tuks athletes aim to make their mark…

“We combine the efforts of the three regions to strengthen the global competitive advantages of the territories,” says Alexey Teksler. – First of all, due to the growth of innovative activity and the development of scientific and industrial cooperation. The number of enterprises striving to enter the REC is growing, which suggests that the chosen path is the right one. Enterprises are interested in developing, and here everything depends on their most effective interaction with leading universities and academic institutes. Ultimately, the development of a high-tech industry will make the much-needed breakthrough in industry today. ”

According to Dmitry Pumpyansky, today it is necessary to do everything possible to develop scientific and industrial cooperation.

“The REC is focused on advanced industrial technologies and combines the capabilities of scientists and enterprises in the real sector. It is aimed both at the modernization of existing production facilities, and at the development of new areas and technologies, ”Dmitry Pumpyansky emphasizes. – The industry is ready to introduce effective domestic developments. For universities, expanding the number of partners means the emergence of practical projects. It is also important that REC participants can count on state assistance.”

The Ural REC is created to fulfill the tasks of the national project “Science”, which provides for the appearance in Russia within three years of 15 world-class scientific and educational centers. The agreement on the creation of the Ural Interregional Scientific and Educational Center (REC) was signed by the governors of three regions in July 2019 at Innoprom.

In addition, the first members of the REC signed a separate agreement on integration and cooperation. In April of this year, the REC was replenished with 63 new participants, including industrial enterprises, universities, scientific organizations of the Sverdlovsk, Chelyabinsk and Kurgan regions, as well as representatives of other regions of Russia and Moscow. Currently, REC includes 78 organizations of science, education and the real sector of the economy. At the moment, the application for the competition of the Ministry of Science and Higher Education of the Russian Federation is in full swing. Winning the competition will enable the already established Ural REC to receive federal status.

Technical University of Munich: Contaminated groundwater will be pumped out via wells

RWTH: The EU Commissioner is the patron of the “Stage Two” startup competition

University of Mannheim: Funding of millions for the expansion of digital…

iednewsdesk Jul 24, 2021
The pandemic-induced ad-hoc switch to online teaching last year showed that there is great potential for digital…