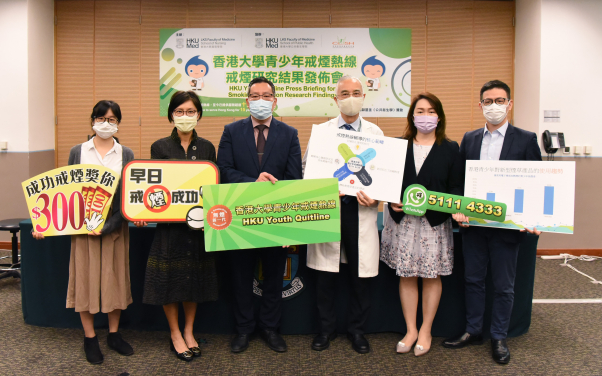 The proportion of Hong Kong young smokers of 25 years old or under who have used new tobacco products (NTPs), such as e-cigarettes or heated tobacco products, has surged to a record high of 85.9% in 2019-2020, according to a recent survey by the University of Hong Kong (HKU) Youth Quitline.

Curiosity (51.3%), peer influence (37.3%) and an intention to quit or reduce smoking (21.6%) were the most cited reasons of NTPs use among 485 of the participants. In-depth follow-up interviews were then conducted to identify the underlying causes. Most importantly, there is a misconception among the young smokers that NTPs were less hazardous to health and could help smoking cessation, which in turn encouraged them to consume even more NTPs. Other reasons of the increasing use of NTPs included the rise of online marketing, more appealing and sophisticated devices and package design, a wide array of flavours available, as well as the recommendation and sharing from friends.

“The HKU Youth Quitline not only has helped many youth smokers but is also a unique platform to identify and monitor new tobacco problems affecting young people, “Dr William Li Ho-cheung, Associate Professor at the School of Nursing, HKUMed and Director of HKU Youth Quitline said. “More resources are required to help more young smokers to quit. For example, the smoking cessation campaigns and services to the young people have to be expanded to cater for the increasing needs, as well as to counteract the marketing campaigns of the tobacco and related industries.”

“The survey results are very alarming, indicating a need for urgent action,” Professor Lam Tai-hing, Sir Robert Kotewall Professor in Public Health and Chair Professor of Community Medicine, School of Public Health of HKUMed said. “We urge the Legislative Council to quickly, with no more delay, pass the bills proposed by the HKSAR Government to ban all new tobacco products including e-cigarettes and heated tobacco products. Other effective tobacco control measures are urgently needed, such as enhancing education and publicity programmes to promote healthy lifestyles, increasing the tobacco tax to discourage smoking, especially among young people in Hong Kong.”

Nearly two-thirds of youth smokers (65.9%) had at least one of the risk behaviours associated with smoking, i.e. regular consumption of alcohol, lack of exercise and drug abuse, the HKU Youth Quitline survey also found. These results indicate another major concern that the more risk behaviours a smoker has, the less likely he/she is going to quit smoking. This negative correlation was confirmed by the present survey finding that only 33.3% of young smokers with two or more risk behaviours were likely to quit smoking, 12.7 percentage points lower than 46.0% of those with one or no other risk behaviour.

The lack of health awareness may explain the unhealthy lifestyle of young smokers. Some admitted that they had consumed more tobacco when drinking, while some others believed that alcohol and tobacco were effective means to cope with stress and unhappiness. However, these risk behaviours can be changed through counselling. Peer counsellors will explain to HKU Youth Quitline participants the health hazards and alternative strategies for coping with stress and negative emotions. About 30% of regular drinkers had quit drinking, while another 20% who did not exercise work out had become regular exercisers.