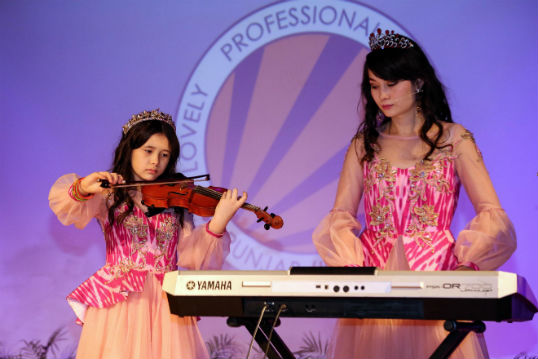 Jalandhar: Under an international music voyage to promote cultural exchanges and people to people relations between Uzbekistan and India, Uzbek family music group ‘Havas’ reached Lovely Professional Campus today. The group with their talent and energetic Indian music based performances made students and staff-members scream like mad-fans of theirs at densely packed Shanti Devi Mittal Auditorium of the University. Though from Uzbekistan, group’s artists sang in different Indian Languages including Hindi, Tamil, Marathi, Punjabi, Telugu and more using a variety of musical instruments like piano, violin, Spanish guitar and more. The group has already won great applaud at TV Reality Show “ Dil Hai Hindustani” which was also graced by Bollywood Badshah Shah Rukh Khan.
The group is known as Havas Guruhi and its members are the winners of several international contests. The concert at LPU was dedicated to the friendship and diplomatic relations between Uzbekistan and India. Present on the occasion LPU Chancellor Mr Ashok Mittal and Pro Chancellor Mrs Rashmi Mittal honoured the great international artists from Uzbekistan.

Under the directorship of Ermatov Rustamjon Gulomjonovich (Father) from Uzbekistan, the group has other members as the lead performer singer and pianist Gulomjonov Khakhraman (Son) and his siblings Gulomjanova Shaknoza (soloist and pianist), Gulomjanov Dostonbek (violinist and soloist) & Gulomjanova Robiyakohn (violinist and soloist). Khakhraman along with his family comprising his father and mother Ermatova Matluba Murotkhojaevna performed to the core and in all perfection. What is surprising and interesting to share is that Khakhraman who sang so many bollywood songs doesn’t speak even a single word of Hindi.
Director Rustamjon informed: “Bollywood films are quite popular in Uzbekistan. Actors like Raj Kapoor, Shah Rukh Khan and singers Sonu Nigam, Shreya Ghoshal and Arijit Singh have a huge following there.” Khakhraman also shared: “I tried to sing lovable bollywood songs but since, I didn’t understand the language, it was difficult for me to sing. So, I sought the help of internet and translated the lyrics to Uzbek. Once, I understood the meaning, it was easier.”