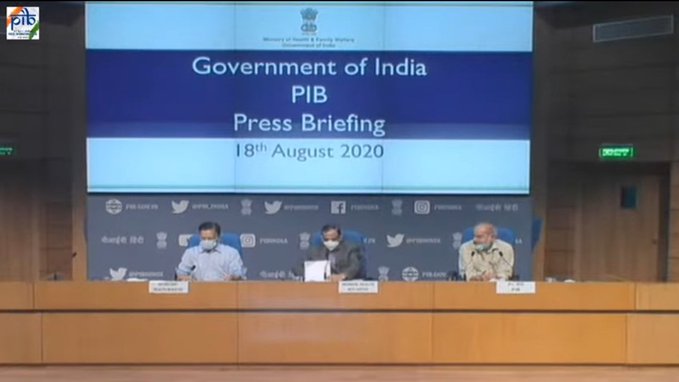 Vaccine candidates are progressing well, we are facilitating them in ramping up capacity: Dr. V. K. Paul

New Delhi: More than 3 crore tests conducted so far, while 8,99,864 tests, which is the highest number of tests in a single day, have been conducted in last 24 hours. At the same time, the count of recovered patients has also gone up to more than 19.70 lakhs (2.93 times of active cases), while the active cases are only 25% of total cases. The average daily count of recovered cases is now more than 55,000 and the Case Fatality Rate is at 1.92%. These are the major highlights of this week, as has been stated by Shri Rajesh Bhushan, Health Secretary, in course of a media briefing on the actions taken, preparedness and updates on COVID-19, held at the National Media Centre in New Delhi today.

The Health Secretary explained, in spite of the increase in testing, the daily average rate of positivity remains low. It has decreased from 10.03 % in the first week of July to 7.72% over the last 7 days. The daily positivity rate varies between 7-8% everyday nowadays, while 73.18% patients have recovered and discharged till date. All this is happening because of increased testing, consisting of both RT-PCR and Rapid Antigen Tests; as a result of which patients are being identified sooner and treatment starting at an early phase. The seven-day rolling (weekly) average of case fatality ratio shows it to be diminishing from 2.89% in the first week of July to 1.94% at present. However, the aim remains to bring down the case fatality ratio to below 1 percent, added Shri Bhushan.

Dr. V.K.Paul, Member (Health), NITI Aayog stated, the weekly highlights give us positive and reassuring signals. Recovery rate is progressing well, mortality rate is stable and going down. But the most remarkable achievement is that cumulative daily testing in the country has reached 9 lakhs. Reiterating that testing is the key for disease containment, reducing mortality and improving outcome. The credit for taking testing to the grassroots levels goes to the central government, state and UT governments, ICMR, scientific laboratories and also industries, said Dr. Paul. He cautioned that COVID Appropriate Behaviours (like wearing masks, social distancing, avoiding crowds and large gatherings hand hygiene, immunity boosting etc) has to continue and we cannot afford to be casual in this respect. This apart, the second pillar of surveillance and containment strategies also must go on. The third pillar is that of seeking medical advice as soon as possible without delay, on occurrence of symptoms.

Speaking about vaccines, Dr Paul said, while one vaccine is in the stage of phase-3 trials, the other two are also progressing well and are in the phase 1-2 of clinical trials. He stated, “We have reviewed all these vaccine candidates. These are progressing well and their developments are taking place in a reassuring manner”, said Dr. Paul. “The outline of vaccine administration and supply chain is ready. As and when required, detailed and micro-level planning for vaccine administration based on a scientific approach according to the characteristics of the vaccine will be adopted”, he added.

On the issue of post-COVID symptoms, Dr. Paul said, new dimensions of post-COVID sub-acute morbidities are coming to the fore, like respiratory symptoms, immunological reactions in children, fibrosis in lung etc. The scientific and medical community is keeping an eye on it. It’s an unfolding story, the medical fraternity is responding and it is expected that they will put out data and information in a systematic way. We will use the treatment modalities available with us as and when required to deal with these cases. He further added that, it is happening to an extent, but not at a dangerously alarming level. Stating this, he urged that we should remain all the more careful because this virus may cause damage after recovery phase too.

In reply to another media query, the Health Secretary informed, the export of PPE overalls is subject to quantitative restrictions, whereas the export of ventilators is not subjected to any such restrictions. In July, 2020, 23 lakh PPEs were exported to UK, USA, UAE, Senegal and Slovenia on being given permission by DGFT, while till date in August, 2020, DGFT has permitted export of 15.07 lakh PPEs to Slovenia and USA.

On a query related to pricing of COVID-19 tests, Shri Bhushan informed, the price rate of testing has decreased from the start of testing in January. The diagnostic kits were mostly imported and hence prices were high till March, he added. Now, most of these testing kits are available on Government e-marketplace and also the prices are in public domain. So, now the state governments have become empowered to negotiate and procure better test-kits at a reasonable rate.

In reply to a query, Shri Bhushan replied, though we are getting satisfactory results of all the measures taken, there is no reason to slacken our guard. Dr Paul added, “Though the weekly update of COVID-19 situation looks reassuring, the challenge has not gone away entirely. There is quite a big susceptible population in the country, so the virus still has the chance to harm us. We have to continue with our efforts and make further improvements”.

In reply to another query, Shri Bhushan stated, the services of those who have recovered from COVID-19 are being taken as volunteers in many states. They work for raising awareness about COVID-19 and urging people in urban as well as rural areas to go for testing on having symptoms and also encouraging people to seek treatment in COVID Care Centres or Hospitals on being tested positive.