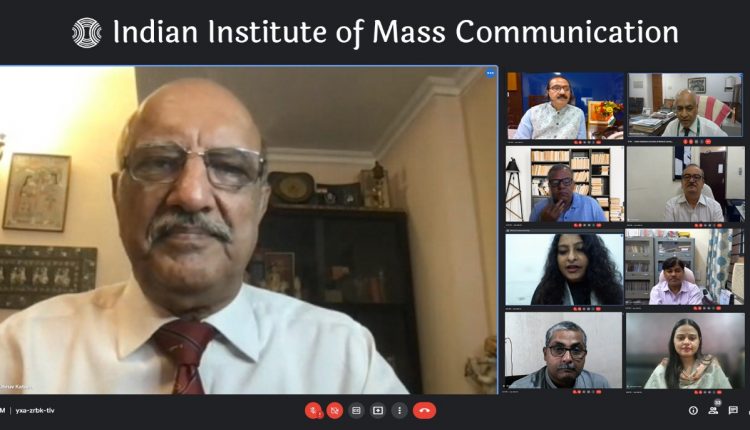 New Delhi: “India needs to be aware of its neighbouring countries using psychological warfare as a strategy. We must learn to utilize the power of the media for the benefit of the country and its citizens.” These views were expressed by Major General (Retd.) Dhruv C Katoch at the Valedictory Function of the Media and Communication Course organized by the Indian Institute of Mass Communication (IIMC) for 32 senior officers of the Defence Forces. Also present on the occasion were the Director General of IIMC, Prof. Sanjay Dwivedi, Principal Spokesperson of the Ministry of Defence A. Bharat Bhushan Babu, Dean (Academics) IIMC Prof. Govind Singh and Course Director of Short Courses Prof. Rajesh Kumar.

Expressing views as the chief guest of the program, Maj Gen Katoch said that Media has an important role in dealing with anti-India forces. Therefore it is the responsibility of all of us to ensure that such forces do not misuse Media against our country. He said that in the modern age of information and technology, the Army needs to make the best use of Social Media, which has grown faster than we thought. If we cannot keep up with its pace, we will be left behind.

Maj Gen Katoch said correct use of information is essential during the war. We’re discussing Artificial Intelligence and must engage with social media if we want to use it to enhance our power. While the Media is an important pillar of the country’s strength, we must use it in a disciplined manner. He added that, in today’s world, where fake news and hate news are on the rise, everyone needs to be media literate.

Director General of IIMC, Prof. Sanjay Dwivedi said that as per the report of a survey conducted in 22 countries by Microsoft; Internet users in India have to face the most fake news. According to the report 64 percent of the Indian population faces exposure to fake news. This he said is a cause of concern, because the global figure is at 57 percent.

The program was conducted by course coordinator Dr. Vishnupriya Pandey. IIMC organizes short term training courses on media and communication for the armed forces every year. These seminars are attended by officers ranging in rank from Captain to Brigadier. Due to Corona, this year’s training programme was conducted entirely online. The Armed Forces have received information this year ranging from traditional media to new media and modern communication strategies. Apart from that, officers have been given instruction on how to enhance relations between the Army and the Media in the age of new media.

University of Texas at Austin: New Way to Pull Lithium from Water Could Increase Supply, Efficiency

UK commits £3.1 million in aid to minimise the humanitarian impact of disasters

University of Virginia: Research Discovery A Pearl Of Hope For…